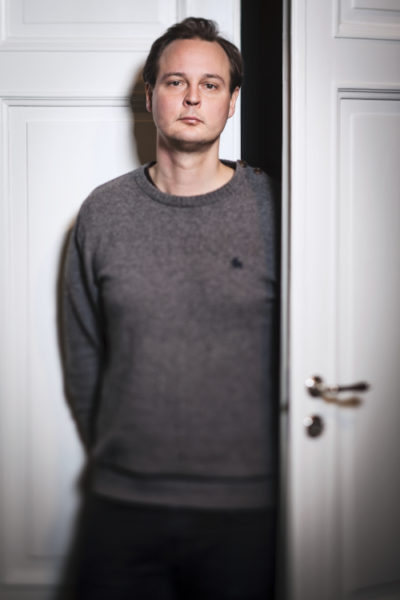 We are continuing our creative literary interviews series with HLA’s writers! Author of a Finnish literary version of Ocean’s 11 Tuomas Vimma tells about his series, fascinating women and running from a prison guard while doing a research for the book. Read the interview here.

HLA’s new video clip series “Not Too Seriously” has found its audience in social media – now the short and humorous takes can be watched also on our Vimeo account.

When one fair after another was cancelled this spring, we thought to keep the wheels turning in other ways. The result is a series of a few minutes long video presentations, in which the authors answer four questions:

1. What is my book about?
2. Why is my book brilliant?
3. Who especially should read my book?
4. What word I could never pronounce?

The short form turned out to be a success. It only takes a moment to watch them, and yet you get an idea about the book, about the author’s mindset – and sometimes even a laugh.

Whilst hearing about books you also see glimpses of Finland. Watch Minna Rytisalo on the snowy hills of Kuusamo, Karin Erlandsson in the Åland harbor, or authors of Woodland, well, in the woods. And it is always a thrill to get a sneak peak to someone’s home office or other places they love.

So far we have had twenty-four authors tell about their books, and there is more to come! Check them out in our Vimeo account here.

The Danish rights of The Woman Who Loved Insects have been acquired by Jensen & Dalgaard.

Selja Ahava’s novel The Woman Who Loved Insects that will come out in Finnish in August 2020 has been acquired by Jensen & Dalgaard in Denmark.

Ahava’s second novel Things that Fall from the Sky has been a remarkable success, with publishers in 24 countries so far.

The Woman Who Loved Insects is a story of Maria, born in the age of witch trials. She has been fascinated by insects since childhood and begins to draw the metamorphic life cycles of them, as did her historical model, the German naturalist Maria Sibylla Merian (1647–1717).

With the passage of time from one age to another the world changes, and religion finds a competitor in science. The novel shows a woman breaking out of her narrow role, gaining a voice and authorship, together with the right to ponder the mystery of the origin of life. Just as insects undergo a transformation, so over time Maria changes, going on to live for 370 years.

Three-day novel on trying to catch a fish while fooled and foiled by an assortment of primeval nature beings has been sold to Jensen & Dalgaard in Denmark and Metropolis Media in Hungary.

Juhani Karila’s novel Fishing for the Little Pike, published in Finland in October 2020, will come out also in French by Le Peuplade and in Polish by Marpress. The novel was awarded with Kalevi Jäntti Prize and nominated for the Tähtivaeltaja Award.

Fishing for the Little Pike, at once love story and mythical fantasy, has been described “a magnificient novel[;] original, realistic fantasy with a Lapland twist” and “a delight” where “even better […] is a warmly ironic portrayal of the locals”. The review of Lapin Kansa newspaper sums it up:

“This son of Lapland has truly hit a bull’s-eye; as someone who has a teacher’s mentality, I feel like giving him 6 stars out of 5 – and this is exactly what I will do. Juhani Karila stretches the limits and borders of the normative world so wildly that it only seems appropriate for the literature critic to do the same. Karila writes world literature in a carnavalesque spirit of Rabelais and with Don Quijote type of characters – only he digs even deeper.”
– Jussi Leinonen, Lapin Kansa newspaper

Piia Leino’s European Union Prize for Literature winning Heaven has been sold to 12 languages so far, latest to German, Czech and Lithuanian.

In our dystopian times, dystopias seem to work: we are happy to announce the 10th, 11th and 12th deal of Piia Leino’s Heaven. German Schenk Verlag, Czech Větrné mlýny and Lithuanian Aukso žuvys have acquired the rights of the novel.

Heaven takes place in Helsinki of 2058. The country has been divides in a civil war. The borders of the southern area are closed and the people are living under the strict rule of Light, an authoritarian movement which has one tool above other to keep the people under control: a virtual reality called Heaven.

What’s more, the people seem to have fallen into total apathy. They live isolated from each other, not wanting to connect nor interact – not wanting anything, with no desires and hopes.

But when a university researcher Akseli meets Iina in Heaven, things start to change.

Heaven has been awarded with the European Union Prize for Literature and the Helmet Literature Prize, and it was the winner of publishing house S&S’s novel competition in 2016.