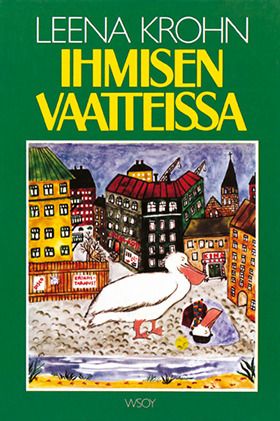 A children’s classic about a friendship between a lonely boy and a bird.

A pelican lands on a beach and becomes fascinated by the way humans live. The bird dresses like a human, gets an apartment, finds work at the opera, falls in love, lives just like anyone else. Grown-ups don’t notice anything, but children see right through the pelican’s disguise. Before long, the pelican meets its neighbor, ten-year-old Emil, who has recently moved to the city with his mother. Emil comes to serve as the pelican’s guide into the world of humans.

But when Emil goes to the countryside to stay with his father, things go awry. The residents of the city realize the pelican is a bird and imprison it at the zoo. Luckily Emil and his friend Elsa come to the rescue.

Originally published in 1976, The Pelican’s New Clothes is a classic of Finnish children’s literature: an enchanting fantasy adventure touching to readers of all ages. It is a story of two strangers who meet in the big city and become friends, a story of dreams, disappointments, and joy. The Pelican’s New Clothes has been translated into fourteen languages and adapted for the screen as a full-length movie.

“Reminiscent of Roald Dahl’s work, it’s a book that deserves to be called a classic.”
– Los Angeles Times

“This is one of those children’s books that is unafraid to tackle philosophical questions such as the true nature of personhood – ultimately leading to a bittersweet ending.”
– Strange Bookfellows literature blog