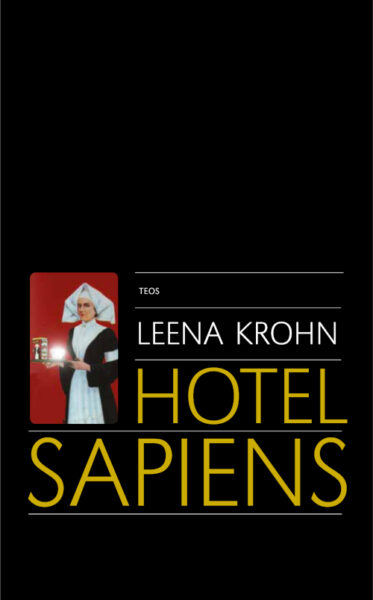 At the Hotel Sapiens no one is OK, and the surrounding world appears to have come to the end of its road.

It is an odd group that lives at the Hotel Sapiens: a blind ophthalmologist, an Ordinary Person, a conspiracy theorist who has observed the clouds, the Higgs boson, a therapist who has lost her mental health and Peik, who is in correspondence with his dead daughter. This motley crew is constantly observed by machines whose intelligence and morals have already exceeded those of their creators.

The Hotel Sapiens is a madhouse. It is also a training centre and a museum. It is a refugee camp and an evacuation camp because those who come, or are brought there are fleeing a world that probably no longer exists. The Hotel Sapiens is a hospital and a medical research institution, for the building’s inhabitants are studied as if they were carriers of a rare disease.

And they are indeed carriers of a serious, incurable disease: a disease named humanity.

Another disturbingly funny and profoundly wise book from the masterly Finlandia Prize winning author Leena Krohn, in which the stories and encounters of the inhabitants of the hotel form a study of humanity.

“Hotel Sapiens is a beautiful gemstone, one of Krohn’s best books.”
– Demokraatti newspaper

“5 stars. You will want to read this wise, strange and intriguing novel again straight away.”
– Me Naiset magazine

“Hotel Sapiens is an impressive and beautiful novel. The language is so stylish that one doesn’t want the sentences to end.”
– Sana magazine

“Hotel Sapiens is a fairy-tale like, enigmatic, enchanting, effortlessly didactic intervention on behalf of humanity and the world.”
– Kymen Sanomat newspaper

“Hotel Sapiens is a splendid work. It fulfils all the expectations that we have grown used to setting for Krohn’s work.”
– Keskipohjanmaa newspaper

“Despite its desperate panoramas, the book also contains humour. The language is beautiful, full of wise aperçus.”
– Kotimaa newspaper

“Leena Krohn’s novel examines humanity in the future and nails today’s phenomena. It moves in a familiar landscape of strangeness. Krohn’s latest novel, Hotel Sapiens, extends its author’s characteristic probing of the borders and duality of the real and the magical, technology and humanity, intelligence and chaos.”
– Savon Sanomat newspaper

“Most fascinating in the book is the way in which Krohn moves with complete freedom between creating aesthetic atmospheres and committed social comment.”
– Turun Sanomat newspaper

“Leena Krohn forces her readers to think, but does so through eccentric but recognisable character types and vivid descriptions. Various open and hidden cultural references bring their own colour to the story. Hotel Sapiens contains comforting wisdom, compassionate humour and refreshing satire, in other words, to quote one of the more amusing characters, all in all ‘a good time’.”
– Aamulehti newspaper