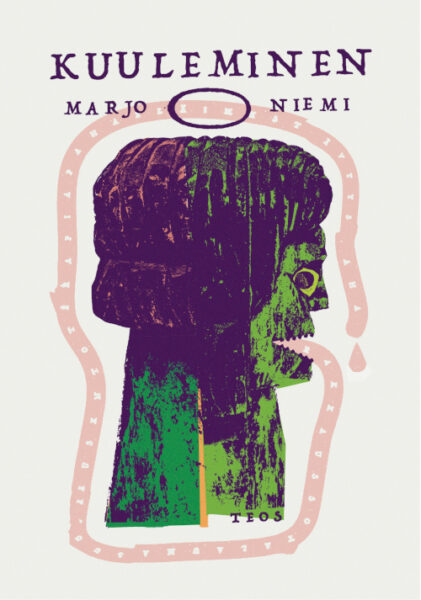 What must we do to be seen and heard?

In Hearing, a relatively ordinary, privileged, middle-class individual gripes, confesses, rationalizes, and begs to be… something. Her own special persona who deserves the lot she imagines for herself, maybe a little money too.

The recipients of her epistles – including her lover, her father, her creditors, and anonymous – get an earful of the narrator’s longing, desire, and art brut. Excesses are not avoided. Reflections of the real world make us aware of their existence, whether taking the form of speed dating, a scriptwriting workshop, or simply a closet.

Marjo Niemi’s narration is without peer. Being human is strange pursuit, and Hearing elicits this in ways that hurt, despite the light-filled laughter that perpetually slips in. Marjo Niemi’s previous novel The Mother of All Losses (2017) won the Runeberg Prize, one of Finland’s most prestigious literary awards.

“What emerges as a central theme of Marjo Niemi’s works is who is seen, heard, and noticed. These questions are also at the heart of Hearing. […] The laughter that the protagonist Titta Kansa inspires in the reader is not a frothy delight; rather it is tinged with a tragic awareness of the perverse nature of existence. […] Marjo Niemi masterfully weaves a black comedy about a person who take her share of hard knocks and doesn’t get discouraged or give up, but keeps trying again and again, if for no other reason than to fail a little more spectacularly next time.”
– Parnasso literary magazine