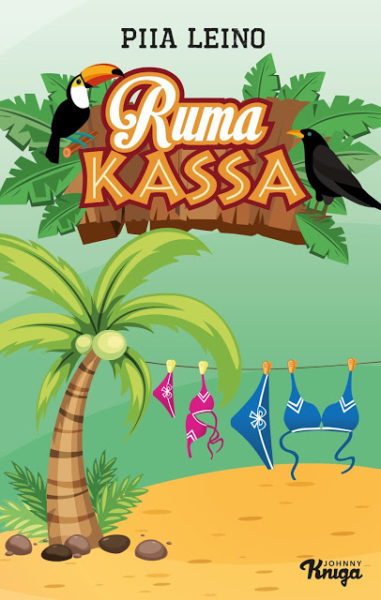 A hilarious novel about the competition between the gross and the gorgeous in a jungle of reality TV.

Sarianna is stuck with her life. She has dropped out of university, and her job as a grocery store cashier feels like a never-ending routine. Moreover, Sarianna feels hopelessly ugly, and that only adds to her self-doubt.

One day a customer invites Sarianna to a screen test for a reality TV show. The show, set on a Thai island, is called The Beauties & the Beasts. One group of women is composed of former beauty queens and celebrities; the other of regular young women, all far from beauty ideals.

On the island Sarianna meets a colourful bouquet of reality TV people. There is the gigantic Christmas person Aulikki; the handsome decoy Joel; and perhaps the most slimy TV host in history, Robert. Little by little, surprising alliances are formed as both the beauties and the beasts rise for resistance on the golden sand of the paradise island.

Ugly Cashier is a story with so unexpected turns that the reader is close to choke with laughter. It is a hysterically funny and raw portrayal of the process of making reality TV, the contradictions of competitors and the roles to which people get accustomed. At the same time, it drills deep to our society, its obsession with physical appearance and to its deeply rooted prejudices.

“Ugly Cashier succeeds in making us think about the questions of physical appearance from many various perspectives. The best thing about this book is its merciless humour that puts the beautiful and the ugly on the same level. Ugly Cashier is a liberating read to young women and to everybody who cannot really understand the phenomenon of reality TV popularities.”
– Vieskan Viikko Newspaper

“The author uses – very appropriately – a shocking and ‘loud’ language. Leino creates sharp, caricature-like characters that the readers can easily see in front of their eyes. The plot is exciting and, towards the end, the main heroine surpasses the stupidity itself.”
– Keskipohjanmaa Newspaper

“Piia Leino’s debut novel Ugly Cashier deconstructs a raw reality-TV-like world and transforms it into a slick entertainment. Despite the superficial roots of the story, it continuously acquires new, deep tones and shades. Before long, the pressures of physical appearance seem ridiculous, but not at all uncomplicated.”
– Maaseudun tulevaisuus Newspaper