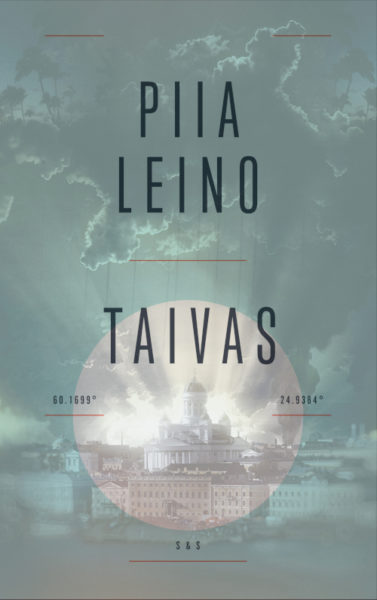 A dystopia of a divided country – and of a future that has forgotten the past.

Heaven takes place in Helsinki, a city state, former capital of Finland, in 2058. Society has collapsed after a civil war, and a nationalist movement called Light has seized the power. Political dissidents have fled to the North. All borders are closed and contact with the outside world is non-existent. No one entertains any visions of a brighter future anymore.

Instead, Light has given its citizens Heaven: a virtual reality. The old world lives on in Heaven, more vivid and beautiful than it ever really was. Heaven is addictive, but it can only be accessed by people with enough money and standing. Common people lead their lives under oppression and misrule.

Akseli works at the university trying to find out the cause of the epidemic of apathy. People hardly leave their apartments, they don’t talk to each other, no babies are born.

When Akseli is given total access to Heaven, he’s soon about to be consumed by the virtual reality – until he meets a woman called Iina. The meeting in Heaven is so powerful that they decide to meet in reality, too. After that, everything changes.

Heaven is a dystopian novel that deals with topical issues: climate change, growing inequality within a welfare state, technological inventions and their growing power, and nationalist movements. Winner of the publisher’s novel competition and the European Union Prize for Literature in 2019, Heaven has gotten glowing reviews. It has also been nominated for Helmet Literature Prize, given to a future classic by the libraries in the metropolitan area of Helsinki.

“Heaven is a greatly multifaceted novel. It analyzes several phenomena of our time and predicts what could come of them. It doesn’t deal only with political themes but also the psychological dimensions of people. The author uses the main characters to discuss gender, problems in self-images, the powergames between people and how you can start with the same premisses and end up with totally different interpretations and conclusions.”
– Helsingin Sanomat newspaper

“Leino’s novel builds layers of several interesting themes. It ponders, whether happiness can be found in artificial reality or rather in the ability to feel and function. Even when the future seems hopeless, there are people who won’t content themselves with the status quo. They want change.”
– Turun Sanomat newspaper