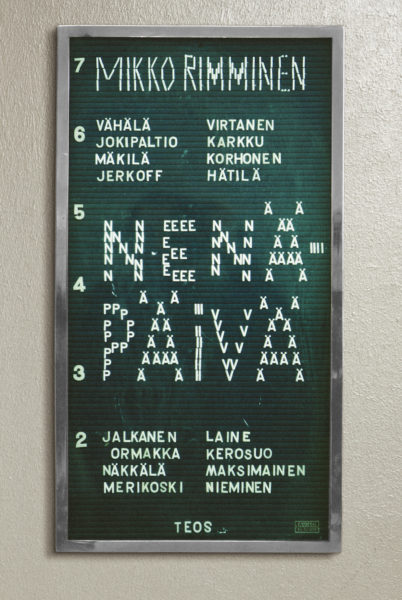 Irma is living by herself in Hakaniemi, an area of Helsinki. Her days roll by and every now and then she even gets a phone call from her grown-up son.

In order to put a stop to her solitary life she starts knocking on doors in her neighbourhood and in Kerava, a nearby city where she ends up on a bus by chance.

Because she needs a reason for being on strangers’ doorsteps, Irma cooks up a story for herself — she tells them she’s conducting a survey. Her somewhat odd questions, weird methods of investigation and flimsy explanations make the neighbourhood suspicious and the police gets interested. Irma starts shaking in her shoes. What are they thinking?

She mustn’t escape; after all, she’s grown fond of her interviewees. Every moment she’s more in danger of getting caught and her ways of solving the problem become more and more unusual.

Finnish literature has not yet seen a female character this verbose, or written with such tender melancholy. Mikko Rimminen is masterful in making the reader love the world, warts and all.

In 2010 Red Nose Day won the Finlandia Prize, the highest annual literary prize awarded to a novel in Finland. It has sold approximately 50,000 copies.

“In this year’s book selection, Mikko Rimminen’s Red Nose Day is a unique phenomenon. It has a far-reaching impact: it oils the rusty wheels of our brains and our love of language, unblocks our tear ducts and gives our laughter muscles a workout. Above all, it massages our feeble hearts.

Rimminen’s language is phenomenally hilarious. It ebbs and flows, it bursts at seams. The text merges with Irma’s thoughts and speech, darts around, flows freely. When the reader gets used to it, the journey becomes thoroughly enjoyable. Masters and connoisseurs of language, such as Rimminen, offer a powerful antidote to any threat of the Finnish language becoming impoverished.

The warm-hearted and charitable spirit of from Rimminen’s debut Park Life is even more pronounced in Red Nose Day. If you begin to feel cynical or the world appears cold or overly logical, go and read this book!”