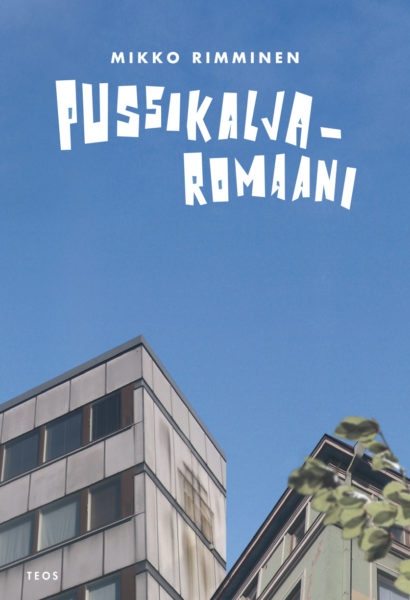 A snapshot from the other side of life, told with a big heart and great empathy.

The one-day story starts when Marshall bumps into Henninen and Pasty, who are still recovering from the excesses of the previous night. They decide to go back to Marshall’s flat to look for their missing dice, but can’t find it anywhere. Each of them has their own way of recovering from the shock.

Decisive that it’s going to be a wonderful day nonetheless the three companions set off. They feel a great warmth towards the world and would only hope for a little love in return. The world, however, seems deaf to their wishes and they soon learn the harshness of life in encounters with the police, teenagers, ticket inspectors on the tram and a gang of bikers.

Marshall, Henninen and Pasty have been condemned to wander the streets of an old working-class neighbourhood of Kallio, and to be thankful that at least they are not entirely alone.

In Park Life Mikko Rimminen has painted an epic tale of an age in which there’s no taking a break from your own life.  As per the traditions of epic tales about the down-and-outs amongst us, the novel explores the whole spectrum of life – including the joys and sorrows of throwing dice.

“Park Life is a reckless book, knock-out and the highlight of the literary autumn so far.”
– Ilkka newspaper

”The staging of the Park Life is like that of the Three Musketeers… The fight of the declined burghers in Kallio is as in vain as Don Quijote’s fight against the windmills… Rimminen tunes the living and being like Jaroslav Hašeks The Good Soldier Švejk… The characters’ missions are approached in the manner of Samuel Beckett in Waiting for Godot… A lot more detailed than James Joyce’s Ulysses, Rimminen’s creation still holds on to the vastness of the world literature.”
– Helsingin Sanomat newspaper

“Intelligent and warm laughter is such a rare phenomenon in Finnish fiction that one would like to establish Rimminen’s Park Life as a preserved area, denied of those with no sense of humor who think of art as something you have to take in gnashingly. Park Life and its protagonist make an enjoyable read in every way.”
– Aamulehti newspaper

“We don’t have anything else but each other, states Park Life, and from this communion these vagabonds that are scared, shy, on the run, sometimes noble and often literally hurt, create light into the world – in this case a few blocks in Helsinki. Rimminen’s language combines beautifully the all too familiar colourless complexity of bureaucratic speech, rare nouns of the lost agricultural society, almost forgotten verbs used to describe the subtle happening of things and the popularized language of science, the borrowings that have become blunt by their everyday use.
– Image magazine

“When Rimminen’s grandmother had read a third of the book she announced that she didn’t like the drunks in the book and the constant swearing. However, once finished with the book, she had almost grudgingly admitted that there is no way you cannot like the boys after all.”
– Anna magazine