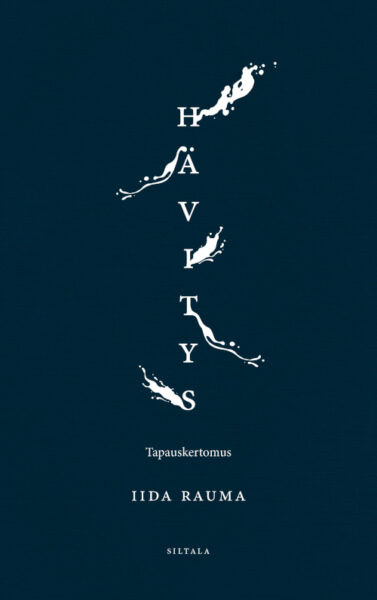 A case study of an individual who was nearly destroyed and all that is being destroyed right now.

While jogging at night, A sees a familiar figure at the city’s desolate fringes and realizes nothing ends, nothing is over. So begins a breathless, desperate attempt to hunt down and escape the past across the ravaged city of Turku, into the water-damaged classrooms of the 1990s and a darkness for which there are no words but still must be expressed.

Destruction asks how one can write about oneself if one’s own self has been shattered. How can we document the horrors of one’s childhood in a culture where adults hate children and want to erase the traces of past wrongs?

Iida Rauma’s third novel succeeds at the impossible. The furious urge to remember, a love for the marvelous history of a burned and demolished city as well as pain that strikes at the core are woven into a stunning tableau of violence, its rings spreading out to the ends of the earth.

Destruction demonstrates the ability of literature to tell the truth when all other ways of speaking have been denied or condemned as lunacy.

“The depiction of bullying is this novel’s cold, hard core. The 200-page passage can be considered a literary masterpiece and utterly unique.”
– Suomen Kuvalehti magazine

“Destruction is like an extended depiction of a prison or concentration camp or perhaps a catalog of evidence at a war crimes tribunal: a detailed report of daily, years-long oppression, of psychological negation and unmitigated violence. (…) Even so, this is no tract. Destruction is first and foremost an artistic endeavor, a novel in complete control of its idiom, and as such a stunning tour de force. (…) Destruction alternates between varying narrative techniques and registers, maintaining its intensity all the while, and complements fiction with facts, facts with a vivid experientiality.”
– Helsingin Sanomat newspaper

About the author:
Iida Rauma