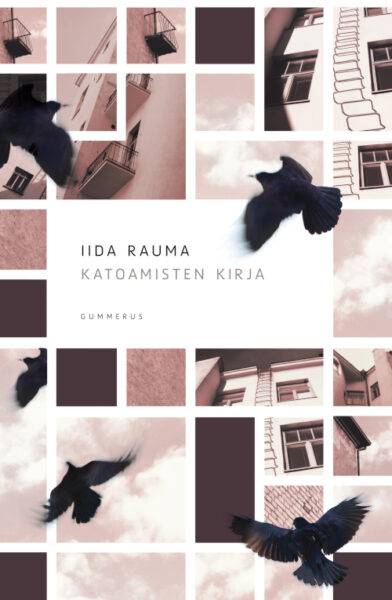 An arresting novel about those who leave without warning.

Some seek release in pills; others by leaving. And then there are those who stay behind to watch and wait despite realizing waiting is vain.

The Book of Disappearances is an unconventional and powerful novel about a tenuous grip on reality, the city of Turku in the autumn, avoiding responsibility, everyday violence, and caring. Its nuanced language and dense atmosphere take us on a journey to uncharted territory, to those blank places on the map.

“Our hearts are on the verge of bursting, as if this were a romance or brutal realism. Strangely, The Book of Disappearances appears to belong to both categories. I can’t help but like it, and I suppose it’s for this very reason. And for its solid technique in every sentence. This rookie doesn’t stumble.”
– Helsingin Sanomat newspaper

“Iida Rauma’s debut novel The Book of Disappearances is everything one could hope for from a debut novel, or any novel for that matter. It is a controlled whole, the writing is good, and its characters have cracks that kindle sparks and tensions within the story.”
– Satakunnan Kansa newspaper

“Rauma builds her sentences with a vigorous, headstrong touch. This debut is a work of integrity.”
– Kiiltomato literature magazine

“The Book of Disappearances is a complete whole. It is both ugly and bare and beautiful and rich. Rauma succeeds in writing the mundane and grubby into something larger than life, fitting the local into the universal. This is why her novel moves us, why we grow attached to the characters, begin to care about them.”
– Lumiomena literature blog

About the author:
Iida Rauma