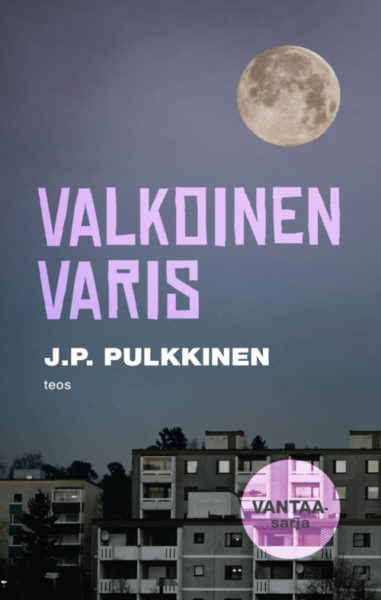 The shadows of the hot summer hide web warriors and hatemongers – and a coldblooded killer.

The Ring Rail Line connecting the airport and the centre of the capital is opened, and a politician from Vantaa is lynched. The matter is being investigated by Liina Vahtera, whose colleague Timo Markkula has narrowly escaped death.

Nothing is as simple as it appears: the roots of the crimes go back into the distant past of the city and its network of people. The recession of the nineties cast its shadow over the present. Fear lurks inside the prefabricated buildings.

“As a detective story, The Large Blue differs from basic police procedurals with a lot of boozing because of its historical dimensions. Pulkkinen has laid strong foundations for going on from here.”
– Helsingin Sanomat newspaper on The Large Blue

“Pulkkinen describes his Vantaa with rough tenderness. The town lives and breathes and it has depth and edginess just as a good central character ought to have. […] The novel is likely to turn into a series and that has to be a good idea.”
– Aamulehti newspaper on The Large Blue