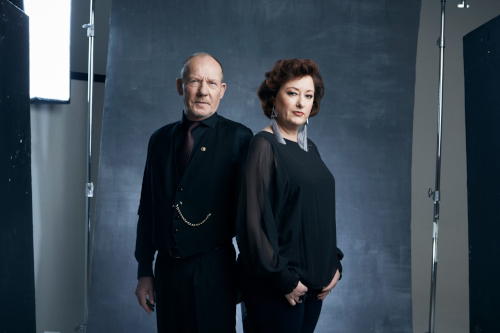 The Dead Still Speak begins the series of five detective novels, in which murders are investigated by a male detective and a female medical examiner bound together by an old secret. The setting is quite prominently Helsinki. The book begins with a witty warning that the characters of the book do not have equivalents in real life – unless they have; and the Helsinki depicted in the novel does have an equivalent in real life – unless the authors have made use of artistic freedom. The neighbourhoods, the views and the weather you describe certainly manage to create a strong and distinctive atmosphere. Would you agree that Helsinki is the centrepiece of novel? Or perhaps of the whole series? Why? And what is your own emotional relationship to the capital of Finland?

Helsinki is absolutely the centerpiece of The Dead Still Speak – and it will also be the centerpiece of the whole series. Actually we consider Helsinki to be one of the main characters of our novels, alongside with Ville Karila and Viola Kaario. In each novel we are going to introduce to our readers different neighborhoods of Helsinki. We both have a soft spot in our hearts for our capital city: for Sari Rainio it has been her hometown for nearly 30 years; for Juha Rautaheimo, it was the city where he was born and where he worked as an investigator and investigative lead in the Violent Crimes unit for forty years. We both love Helsinki, the different faces of the city in different seasons, and writing about the city is really important to us. The artistic freedom we might take includes only minor details – the sceneries and the atmosphere of the city are, of course, as true as it can be …

The events of the novel take place just before Christmas. Apparently, the series is going to cover the whole range of Finnish holidays. How did you end up with this decision? Is it true that the homicide rate increases remarkably during the holidays?

It is true that each novel in the series will circle around a different Finnish holiday: Christmas, Easter, May Day, Midsummer… This decision came quite naturally to us, since we both like these holidays very much: all kinds of traditions, food and beverages, music etc. This decision also goes hand in hand with the decision to describe different times of the year in each novel.

When it comes to homicide rates, they actually don’t increase remarkably during holidays. Sometimes there might be a little increase during the weekends, because of the usage of alcohol, but this is not connected with holidays.

Fact and fiction. Even if the cases depicted are mostly fiction, there seem to be quite a few hints to real crimes. Can you describe your method of writing about the so-called textbook crimes?

The main plots in our novels are completely fiction, but we might use bits and pieces of real crimes here and there in the story. For example, in The Dead Still Speak we took the body found at the bottom of an old industrial chimney and the body of an elderly strangled lady – two real crimes that happened years apart and didn’t have anything to do with each other – and started weaving our own story around them. We might also mention famous real crimes by name in our novels, but these crimes do not have any big role in our stories.

Besides the humorous flicker, the Mortuí non silent series seems to have a deeper, more serious ethical and moral agenda. What are the themes you would like to cast light upon?

Both are important to us – humor and more serious agenda. Throughout the whole series, we are observing death from many angles and of course, mainly through our medical examiner’s, Viola Kaario’s eyes. We wanted to write crime novels where death is not just something that happens so that protagonists can solve the crime, but something that has a deep effect in many perspectives – and where dead people are not just plot twists, but important characters treated with respect. Also, in each novel, we want to cast light upon some specific influence crime has on its victims. In The Dead Still Speak, we are observing the tragic and profound mental damage a Casanova figure can cause to his victim. In our second novel, our protagonists will be dealing with the effects of an unsolved homicide: the tight knot of suspicions and guilt that has destroyed many lives for decades.

The atmosphere, as well as certain details and hints in your novel pay homage to the classics of crime fiction. Who have been your best examples and teachers – or perhaps the authors you are trying to debate with?

We are both huge fans of crime fiction, and one of the most delightful parts of the writing is paying homage to the classics of the genre – and of course to our own favorites. Sometimes these homages are clear and simple for anyone to see, sometimes they are hidden and only visible if you’re a true fan of the classics yourself. Sometimes these homages are intentional, sometimes they come as a surprise to ourselves too. We love Agatha Christie and the golden age of detective fiction; we love Mika Waltari and his Finnish Inspector Palmu from the early decades of the 20th century. Cozy crime is our thing. You will not find graphic violence, splashing blood, torture scenes or serial killers in our novels. What you will find is the atmosphere of the classic crime novels combined with modern police work – and of course, a juicy murder mystery.

What is your favorite word?
Sari: Morning
Juha: Motion

What turns you on creatively, spiritually or emotionally?
Sari: Scents (especially scents connected to Christmas). Tuscan landscape. All kinds of music from the first decades of the 20th century.
Juha: Getting close to solving a case.

What turns you off?
Sari: Baseless arrogance. / Juha: Unsolved cases.

What sound or noise do you love?
Sari: Raindrops on rooftop or windowsill.
Juha: Sounds of ocean and waves coming to shore.

What sound or noise do you hate?
Sari: Anything too loud when I’m trying to concentrate or sleep.
Juha: Any sound too loud (except my own voice, ha-ha-ha).

What profession other than your own would you like to attempt?
Sari: Medical examiner, librarian or owner of a little bookshop.
Juha: Navy Officer.

What profession would you not like to do?
Sari: Crane operator.
Juha: Cabdriver.

If Heaven exists, what would you like to hear God say when you arrive at the Pearly
Gates?
Sari: “With your lifestyle, you barely made it.”
Juha: “Welcome. Now all your unsolved cases will be solved.”