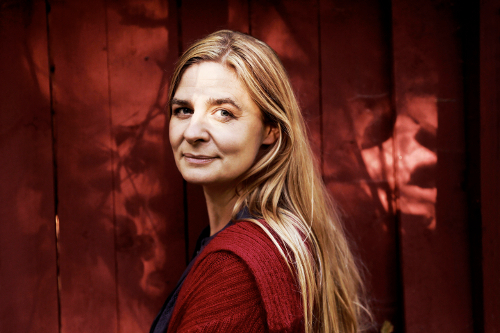 Your third novel All that Is Alive digs deep into three difficult destinies of three very different people. It feels like an incision, or even a sort of research of our time, with a lot of various, complicated topics intertwining: poverty, the difficulties of illegal immigration, sexual and physical abuse, depression, bullying; as well as leaning on others, looking and hoping for help. Can you tell us a little bit about how you ended up writing this book?

Thematic magnet of the novel, its beating heart as well as the initial impulse for writing it was an ancient concept and a figure of homo sacer, a sacred and an outlawed human being, who can be killed without punishment, but not sacrificed. I wanted to explore the experience, the language and the heartbeat of such vulnerable figure who exists without rights to neither live nor die in our present moment. Two of my main characters end up living in such state of survival, in exile or as a runaway – with and without their own intent. However, for me the political and existential themes of this set-up soon became questions related to language and silencing, of rights to speak. I wanted to reach the inner speech of my characters in the state of muteness, their bare language.

The topics you explore are so present in our society, and happening so close to us. Is fiction your way of trying to understand these social problems yourself, or to encourage the reader to pay attention to them, to make them realize that it indeed, “happens every day”, as you write in the book?

After writing two novels set in the past I really wanted to return to the moment of now. I was eager to still explore the themes I already touched upon in the previous works Heaven-Bearer and Our Earthly Life – power, subjectivity and language – but now as questions related to moral values of our present time. The writing truly became an exploration of the NOW driven by my characters. My main motivation, I guess, was to make visible the very subjective, experiential and vulnerable side of these people, whose human rights our society is ready to neglect su easily and thus exclude from ”the good life”. The development of the narration was also very much effected by the political decision making of the past years in Finland – however, on the level of ”the every day life” and our parallel human experiences, too.

Did you do a lot of field research in order to create your protagonists? For instance, Alan, the illegal immigrant facing deportation, felt like a very real person. I wonder if he is based on a person or set of people you’ve met in real life?

My method of background research is mostly based on abundant reading and focused observation. When writing the novel I didn’t lean on personal interviews of real people as, for example, Jenny Erpenbeck has done for her excellent book Gehen, ging, gegangen on similar subjects. I haven’t actually ever met a person like Alan, an exilee of the persecuted Yazidi people. On one level Alan can be identified in relation to his culture, religion and the ongoing annihilation of the Yazidi people, as well as the very realistic social conditions he ends up dealing with in a Helsinki-like city. At the same time, he is a fictional character based on imagining a life, an experience, a rhythm of breathing; a subject to these conditions. Moreover, he is much more than that, too: an orphic poet, a mystic, even a transcendental being in a state of constant metamorphosis. A homo sacer. One of Rilke’s angels. Melek Taus. An allegory. This continues with my other main character, the wolf-girl Aura, a teenage fugitive on the run from a juvenile home.

Since the Finlandia Prize winning novel Our Earthly Life (2013) your books have been praised for, among other things, their spectacular, poetic, rhythmic language – it definitely shows in All that is Alive, too: even different protagonists have their own, different styles of telling the story. What inspires or, has inspired your writing style?

Capturing the rhythm of my characters in language and narration is one of my primary artistic intentions and since my last novel it has also become a very conscious way of writing. Virginia Woolf’s and Gertrud Stein’s insights on rhythm, style, characterisation and narration are important cornerstones of this deepening knowledge. This time, also a variety of musical, cinematic and philosophical material drove my exploration of the characters and their voices. For example, songs from Sonic Youth and Velvet Underground to Schubert’s lied Der Tod und Das Mädchen were important in creating Aura’s rhythmic scheme along the way. Alan’s refrains were more difficult to find. In order to capture his rhythm I needed to go to the roots of our culture and linguistic history, all the way to the extinct language of Avestan and mysteries of Zoroastrianism.

Despite gruesome events and complex lives of the characters, the novel’s main message seems to be empathy – something I feel nowadays we often forget. Legendary comic Dave Chappelle described it as “The Age of Spin” and one of the main problems of younger generations. As he put it: “How can you care about a space ship blowing up, if there’s something blowing up every day?” Do you feel the same way? Has empathy become a disappearing quality that people have to be consciously reminded of?

While writing the novel for the past five years, I have been very conscious and worried about today’s growing violent and narcissistic moral atmosphere in general, and also about how it is affecting the destruction of the climate and the collapse of the world we have lived in. With this book, I attempted to become more conscious of this state myself, as well as of our responsibility of it. However, I preferred to depict our capabilities to help and support others and for that purpose, I tried to thrust the narration to a point in which an emergence of a more humane and empathic community as well as a less violent language would be possible. I consider compassion to be one of the most crucial capabilities of us humans, something what makes us this species. And we are not the only ones. Empathy and compassion are qualities found in other animals, too. The ethos of the novel reaching its title is also based on this experience.

At the moment, I am still in a caesura, a standstill of writing – trying to find a new rhythm, new direction, new worlds to explore. Yet, there are also certain questions articulated in writing All that Is Alive I still want to commit myself to in the future. Even the idea of becoming a community, becoming a language still engages me. Some other echoes from the previous novels can still call and invoke me: unseen dreams of the children in the state of resignation syndrome; 300 votive masks of sacrificed children found in Faliscan graves; some tunes, a refrain, a rhythmic motive. I am not sure yet which time or era – past, future or present – I will move into. This is one of the most enjoyable sides of the writer’s work: to be able to move in time in different directions.

What is your favourite word?
I want to name three words in Finnish: rakkaus (love), yömyöhä (late in the night), maailma (world).

What is your least favourite word?
Several words in the current populist right-wing vocabulary which aim at diminishing the dignity of other human beings and which I myself don’t want to repeat here.

What turns you on creatively, spiritually or emotionally?
Contradictions with an aura of uncovered mysteries.

What turns you off?
Cynicism, racism, hate.

What is your favourite curse word?
Perkele!

What sound or noise do you love?
The sound of silence.

What profession other than your own would you like to attempt?
A composer of experimental music. An ecologist.

What profession would you not like to do?
A stockbroker.

If Heaven exists, what would you like to hear God say when you arrive at the Pearly Gates?
If Heaven existed, I wouldn’t see God as the door person, nor existing there as such, perhaps many gods and goddesses instead, and all the other fantastic creatures we have imagined and created in their chimeric animal bodies. I’d rather hear some music than words at the Gates. If there were some words to be announced, I am not sure I would understand them yet. Maybe it would be a completely new language to comprehend. This topos is actually where my novel ends. We are taken to the Gates by the fugitive peacock (angel) and encountering a group of apocalyptic demonstrators who are trying to find new words, new lyrics even for Bob Dylan’s song The Gates of Eden – perhaps in order  to redeem a new Heaven on the Earth.