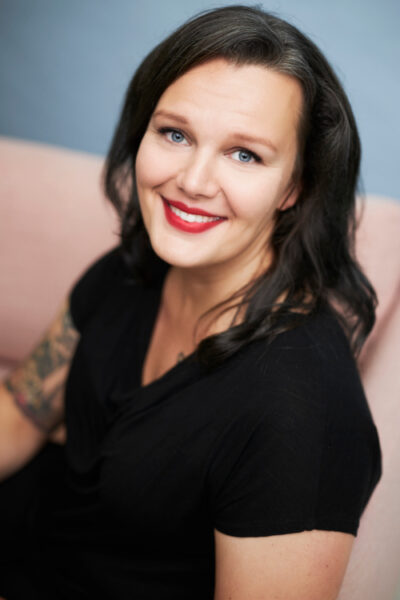 “Love, occultism, a mysterious disappearance and English literary history intertwine in a fast-paced story” – this is how a Finnish magazine summed up your novel The Death of Romance. The Wounds of Love, in turn, has been described as a blend of mystery and melancholic poetry, and praised for featuring likeable and deep male characters – apparently a rarity in romance literature. Both novels wittily break some clichés and expectations of the romance genre.

Let us first talk about the romance genre in general. Why romance, and what does the genre mean to you personally?

I was a sucker for romance ever since I was a teenager. I read a lot in general, but I really loved romance fiction; the trashier the better. In my twenties, I began dabbling in writing it myself, and after getting some short stories published I thought I knew what I was doing. It took years of writing, of learning the craft by writing pulp romance to realize I actually wanted to write romance. I always thought I’d be a literary fiction writer, but the fiction I wrote always circled back to romance.

Love has always been one of the great mysteries of life to me. Romance fiction is one way to explore that, to try and make some sense of how two people find each other and fall in love. Underneath that betrothal story is a deeper mystery: what is love? How to describe a ubiquitous feeling, that is notoriously difficult to recognize in real life. What is love made of? How is it different from romance? How does love work? Romance fiction may not have the answers (but neither does philosophy, so there we are) but it is an apt platform to explore the issues around romantic love.

What is the literary landscape of The Death of Romance and Wounds of Love? What
works of world literature do your novels hold a conversation with?

The Death of Romance is an homage to the Romantics: Keats, Shelley, Byron and the rest of “the guys in the band”, as the pun went in the Inspector Lewis episode. Their works have interested me for a long time, but especially since I came across a story of an Oxford student finding a first edition of Frankenstein inscribed by Shelley to Lord Byron. The lives of the poets, intertwined around art, science and love build an interesting backdrop and add nuances even to storytelling that takes place in modern time. As for the storytelling, I have been greatly influenced by the British TV, countless detective series and Christie’s Miss Marple stories.

As for Wounds of Love, I suppose its point of reference is a mix of the action series Strike Back, military accounts and war memoirs (for instance Andy McNab and Chris Ryan make an interesting duo) and Norse mythology. The physical landscape of the novel is Finnish summer, so obliviously there will be some references to Finnish poetry such as Eino Leino, and of course everything I have written against the corpus of commercial romance fiction I have read over the years. The Wounds of Love is more action-oriented, and compared to Nora (the protagonist of The Death of Romance), Ben is less of a reader and more of a doer. But that doesn’t mean I couldn’t squeeze in a ton of popular cultural references, for they are the spice of life for me.

Wounds of Love is a sequel to The Death of Romance. What, in your mind, are the special characteristics of creating “a series”?

I don’t really consider Wounds of Love a sequel to The Death of Romance, despite the books sharing a few characters. Their tone is very different, even if they were born of the same origin. While I was dotting the i’s on the final manuscript of The Death of Romance, a persistent voice began talking in my head. It was Ben, Dorian’s brother, who was nothing like Dorian in the first book. It was Ben that dictated the second novel, and took me on a journey I never expected after The Death of Romance. Suddenly, I was fascinated by weapons and explosives, the MOs of Special Forces and the mindset of an elite soldier. I wanted to run, hike, box and shoot things, but luckily only got my hands on an airsoft gun. The writing process was very different from my debut novel, a lot more physical and I’d say verging on method acting.

The joy of having something in common with the first novel came from having something familiar to go back to. Dorian is an interesting contrast to Ben, and Nora, the protagonist and narrator of the first novel is portrayed in a very different light through Ben’s eyes. This wasn’t a conscious creative choice but rather something that just happened because the presence of Ben was so profound. In a way, he wrote the book, not me. Perhaps I should outsource the book reviews to him as well. He’d be cool about them, not as emotional as I am.

In Wounds of Love you have described the wounds of war – both literally and figuratively – with impressive plausibility. What was your technique?

My technique? Genuine interest. Aspiring writers are always told to write about what they know, but I think that’s constrictive and boring. Write what you want to know about, what you’re passionate enough to really delve into – that is my motto. I had no prior knowledge of the army or military operations of any kind, but I found out about it. I researched, so I got the details right. The more I read and researched, the more Ben had to say. I suppose that happens to a lot of writers.

Romance fiction has been considered women’s sport, most of the readers and writers being female. Sometimes, I wonder if I wrote The Wounds of Love for men. I wanted to write about men to understand modern masculinity better, but maybe I also wanted to start a conversation about romance and romantic ideals and how they might affect men. I took a leap to try and convey how a man might experience and understand love, and judging from the feedback I’ve received I hit home on several issues.

But when it comes to Ben and his trauma, I think the psychological details are universal. It’s about the human experience, and the rawness of war is simply a magnifier for that. At the core of an artist’s work is an ability to imagine, to step into someone else’s shoes and find what is common, what is shared and what can be learned from a different perspective than one’s own. Underneath all his scars, at the core of Ben are his basic human needs, the ones we all share, and they are what drive him.

All in all, Ben is me. We may not have shared experiences, but we share the core aspects of being a vulnerable, breakable human being. We all have scars in the end. And no one survives life. No matter how stable your life is, you cannot escape the fact that it’ll all end some day. Whether you’re a warrior who has to face that fact every time he goes out to battle, or an office rat dying a slow death of monotony, the fact remains: there is no meaning in death, only in life.

You have been attributed virtuosity in creating Gothic atmosphere. What are the roots of your affection towards dark and mystic ambience?

I was born to it. I live in Finland after all! The darkness is so persistent I think it’s a requirement to be able find beauty in it in order to survive the winter here. I don’t remember being afraid of, but rather intrigued by the dark. It whispers not of danger and violence but of peace, stillness and beauty. Yeah, I’ve always been one of those to wander out only after sunset, to roam the graveyards and sit in the quiet of the night. But I’m getting older now, so staying awake after the eight thirty news is getting harder and harder.

A lot of my popular culture consumption has always been around Gothic culture. I still remember the first novels I borrowed when I got a card for the adult section in the library: Dracula by Bram Stoker and Frankenstein by Mary Shelley. I don’t know if it gets any more gothic than that.

Who do you write to? Do you have a “dream audience” or a specific reader in mind?

I write to the voices in my head, to exorcise them. I write to make sense, to be present, to control my feelings. I write for a better version of myself, for someone who can be lured in by action and entertainment but will riot if there isn’t any real substance under the surface. As a reader, I want to be hooked, but also made to think. In commercial romance fiction there is often a specifically designed focus group for whom the writing is targeted. Large scale publishing houses tend to dictate a lot of the content, and the writer has to direct their creativity to meet a checklist set by the publisher. I have had the advantage of writing romance for a general Finnish publisher, who has given me free hand. So I’ve written the kind of romance I would have wanted to read. I think my writing will be appreciated by anyone who finds beauty in the fact that as humans, we are driven by the two major natural forces: sex and death. There is equal beauty in physical desire or corporeal longing and in the fleeting nature of everything, our being-towards-death.

One might debate wether Wounds of Love even fits the genre definition of commercial romance fiction. I never dreamed of messing with the promise of an optimistic ending, but I’m not entirely sure if the central love story is as central as it is considered in the genre definition. In the same way as feminist romance fiction makes a point of the heroine having an independent life outside the budding relationship, I wanted to portray Ben growing as an individual to become capable of love. But whatever the genre, it can still be read as a romance.

Finally, a version of the famous Proust Questionnaire, used by the legendary French
journalist Bernard Pivot at the end of every broadcast of his literary television talk show
Apostrophes.

What is your favorite word?
Katve (blind spot).

What is your least favorite word?
Minä (I, me).

What turns you on creatively, spiritually or emotionally?
Dullness and boredom. If there is a void, you will eventually feel the need to fill it.

What turns you off?
Fear, or navel-gazing. Very often they are the same.

What is your favorite curse word?
Perkele.

What sound or noise do you love?
The quiet, soft breathing of my partner when he is asleep.

What sound or noise do you hate?
The breathing of anyone else too close in my personal space.

What profession other than your own would you like to attempt?
Carpentry. I’d be shit, but I’d love it.

What profession would you not like to do?
Customer service of any kind. I would be totally uncapable to perform.

If Heaven exists, what would you like to hear God say when you arrive at the Pearly Gates?
“I told you so”.