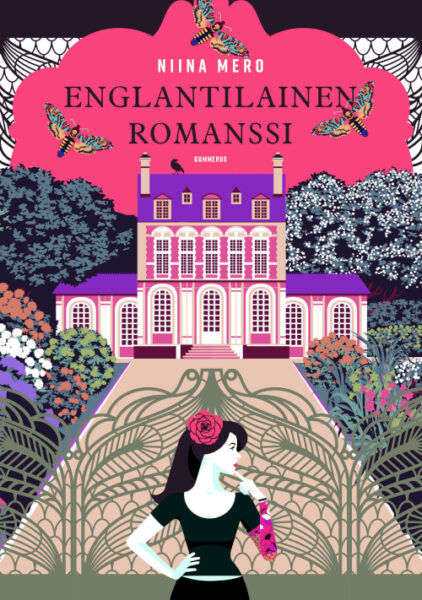 The brooding romance of countryside estates, an unsolved mystery, and Romantic poetry come together in a deliciously engaging debut.

Nora, who loves the English Romantic poets above all else, receives an invitation to her sister’s wedding in Oxford. Allergic to bridal fuss, she accepts reluctantly, only to find herself swept up in the gothic spell and lush gardens of her future in-laws’ manor and the musty-library romance of the university town.

But cracks form in the idyllic façade. The always-curious Nora comes to learn the family’s older brother disappeared years before without a trace, and her acerbic heart is set aflutter by encounters with British gentlemen and hidden secrets. Before long, she discovers English manners can conceal truths whose consequences may prove fateful.

In Mero’s unputdownable debut, Bridget Jones’ Goth counterpart is cast into the moody ambiance of Jane Eyre, the upper-class romance of Downton Abbey, and plotting worthy of English detective stories.

“In Niina Mero’s debut The Death of Romance, love, occultism, a mysterious disappearance, and English literary history intertwine in a fast-paced story. Events are steered by emotions rather than the mystery of a missing nobleman – and, indeed, the tangled relationships offer plenty to engage readers. The characters initially come across as familiar stereotypes from commercial romance, but the stream of surprises does not dry up as their surface layers are peeled back. The page-turning plot does a delightful job folding expertly packaged facts into entertainment.”
– Eeva magazine

“Niina Mero’s debut novel The Death of Romance is compulsory reading for all lovers of England and British literature. Those unfamiliar with the classics may miss many references, but that won’t prevent them from throwing themselves whole-heartedly into the glitz of aristocratic life. The novel is an entertaining romance piquantly spiced with literary research and a soupcon of murder mystery.”
– Maaseudun Tulevaisuus newspaper

“The novel refers extensively to the poetry of John Keats. Percy and Mary Shelley, Lord Byron, and Edward Trelawny also make appearances. Both the work as a whole and individual scenes are so skilfully written that the scholarly elements feel neither disjointed nor didactic, and may well pique interest in the works and authors of the Romantic era. […] At the same time, The Death of Romance takes a critical view of the expectations regarding and conceptions of love portrayed in romance novels and other uber-romantic genres. A pleasure to read, especially for lovers of literature, Keats, and Victorian Romanticism.”
– Kansan Uutiset newspaper

“Welcome elements include siting the story outside a Finnish milieu and the successfully drawn romantic setting. The blend of mystery, melancholy poetry, and the main character’s informality works. The result is suspenseful, romantic, and funny.”
– Hämeen Sanomat-newspaper

“In addition to a strong and surprisingly well-drawn protagonist, the milieu of The Death of Romance is skilfully constructed. […] The humour is irresistibly wry, witty, and self-deprecating. […]The Death of Romance is smart entertainment, light-hearted and spirited – and utterly void of the silly vapidity characterizing of many recent works in the genre.”
– Mitä luimme kerran literature blog

“The Death of Romance brings together clichés and fresh elements to form a new flavour of commercial literature. I was surprised to discover little romance of the pink, fluffy variety. Instead of candy floss, I got a fun, unexpected read.”
– Lukuisa literature blog

“The novel is a romantic comedy and neo-gothic mystery. Mero knows how to plot a story with humour and suspense. Everything is in its place: the narrative, the milieu, the cultural references, the attitude towards romantic fiction. The story draws the reader in, absorbs her wholly into its world. […] This is the literature I have been craving: romantic entertainment for those who dread romantic entertainment. […] Mero’s novel succeeds in being both funny and suspenseful.”
–  Lumiomena literature blog

About the author:
Niina Mero