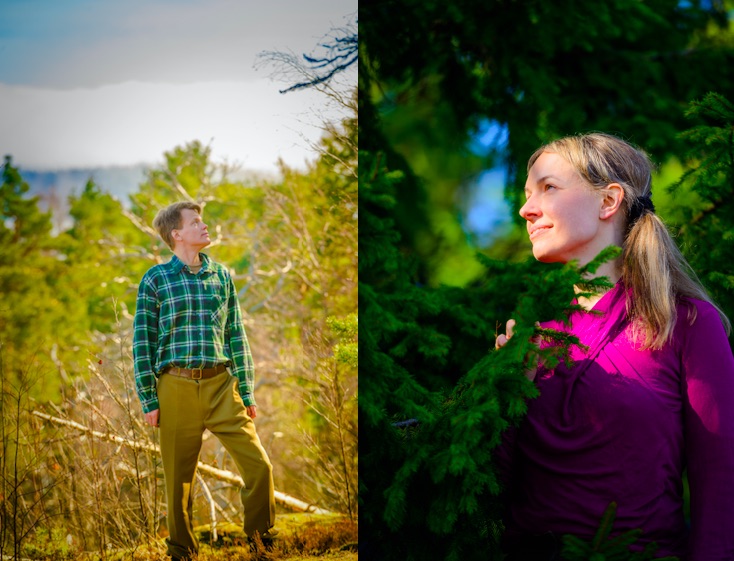 The main setting of your new book Woodland is something called Forest Estate (Metsätila). Could you tell us a little bit more about the beginnings: what is Forest Estate and how did you end up there yourselves?

The word metsätila translates from Finnish not only as a “forest estate”, but also as an inner state of mind. And that’s what it is for us. Forest Estate, our patch of forest with a small wooden house, is a place of creativity and connection with nature. It has enabled us to create a forest therapy model that is now incorporated into the official healthcare system in several districts in Finland. Here we have also written our books.

Ending up in Forest Estate was a result of a conscious process: we searched for a place of maximum polarity, a place that is highly wild and rural and, at the same time, located as close as possible to where the people are. The distance to the heart of the capital city Helsinki is less than 24 km, and yet we are surrounded by thousands of hectares of taiga wilderness where lynxs and occasionally even bears and wolves roam. This combination is pretty unique even at the world’s level, and somehow manifests the main idea of the Finnish psyche where forests are just behind the corner.

In our hectic, stressful world where burnouts, depression and sleeping problems are becoming a norm of a city-dweller’s life, the so called forest bathing is attracting more and more attention: a great example of it is a phenomenal success of Peter Wohlleben, or, for instance, selling the rights of your book to Latin America. How are Finnish forests and spending time in them different and exceptional? What is different about the Forest Estate?

It was enormous challenge to inhabit Nordic areas with rough climate and very little sunlight. To survive up here, one never had a choice but carefully observe natural conditions. The deep bond between forest and man became a basis of our very survival, and also an escape route from threats, psychological tensions and conflicts in society. During the Winter War in 1939–40, Finns allied with nature making the best out of the forest combat tactics, and a miracle happened: David defeated Goliath. In our genome, we still carry more imprints from hunter-gatherer ancestors than people elsewhere in Europe.

Above all, for Finns a forest, metsä, has always been a place of refuge, myths and sacredness, a way of understanding oneself and others. According to a research done in the 1990s, a majority of Finns associate forest with a lap or a womb, something that one craves.

In Finland there are more trees per habitat than anywhere else in the world. We have approximately 4500 major size trees for each Finn. Recent satellite imaginary analyses have revealed that “the most forested forest” (meaning tree biomass per square kilometre) of the whole country lays where Forest Estate is! However, in our book, we pursue to dive into the question what other things than trunk cubic meters the peak of “forestedness” can mean, and how the tall and thick trees that support the diversity of living creatures can become a state of mind.

Besides fascinating facts about the benefits of nature, one of the greatest things in your book is the use of actual examples from your guided forest tours: telling real-life stories of people changing in front of your eyes after spending just a few hours surrounded by nature. Are there any particularly memorable cases you could share with us?

Although the change in people is often subtle and gentle, there are some dramatic examples, too. During one of our treks, badly quarrelsome members of an executive council of a big organisation bursted into tears of relief while listening to soothing sounds of a brook. Another time, problematic teenagers, “the baddies” of the notorious Eastern Helsinki district, found – much to their teacher’s surprise – their tender inner children while feeding goats with natural plants of a forest meadow. Yet another time during a trek, a person with 70 kilograms overweight won herself by strolling the whole challenging trail with others; at the end, she raised her arms like a winner of the Olympics (according to a research, nature really makes our moving lighter).

We also had cases when people experiencing a great loss, sadness or exhaustion, or struggling with serious diseases started shining in a forest. On the other hand, active and outdoorsy red-cheeked people, who have trekked and skied all their lives, were suddenly able to find a completely new perspective to nature. Some people have also told us they have cried while reading our book, because it made them remember how much nature can nurture and uplift, and how much it means to them.

What are the most important and interesting things you’ve learned observing people in nature?

Even though in the forest we work with groups, we encourage people to deepen their connection with nature as if they would be on their own. Still, people bond with each other beautifully. Natural environment stimulates a deeply rooted human need to socialise, which has also been shown in many studies. The easiness in social relations often surprises us: people of different ages, backgrounds and even those with serious social problems are naturally together in forest.

In forest we do not burden people with long lectures. However, along the years we have learned that people yearn for knowledge about nature. Especially when transmitted in the form of stories, knowledge can stimulate instincts and intuition, and lead to a feeling of being a part of the whole. Through knowledge, forest reveals more and more nourishing nuances. The same philosophy is in our book: we want to tell about nature in such a way that a reader would start to feel well.

We encourage people to activate senses, observe wildlife and breathe in the midst of a moment. We stare at a bonfire and surrender to fascination. We search for rest lounges, gyms and art exhibitions among old trees, brooke banks and boulders. We plunge our faces in a moss carpet, relax facial muscles and inhale the invisible realm of beneficial microbes. The more we do all of this, the more willing people get; it’s like they are sensing a way back home.

What are your plans for the near future? Maybe you have another book in mind?

Right now we have just entered kaamos, the period of deep darkness in a northern year. In tune with that we will lead our Health Forest group (patients from local health care center) to make friends with darkness. We tell stories about the northern wildlife coping with darkness and coldness and get inspiration to sustain our wellbeing. We go to forest after sunset, and once it gets pitch dark, we will turn off our lanterns and relax with the blackness of night.

And yes, we also have a new book in mind… We are watering the sprouts of it.

What is your favorite word?
Maailma, the Finnish word for the world. It is beautiful as such, but it’s also inspiring to contemplate it consisting of two parts, maa = earth and ilma = air.

What is your least favorite word?
Kasvinsuojeluaine, the Finnish word for pesticide. Literally it translates as “plant protecting agent”, but it actually destroys plants.

What turns you on creatively, spiritually or emotionally?
Moments of fruitful emptiness. A free day, hour or moment (preferably freely wandering in forest or along the seashore where the default mode network of the brain is activated). Flame of inspiration flashes often right when it is least expected.

What turns you off?
Too strict schedules. Goals, deadlines and strategies are elementary part of fulfilling one’s mission, but the secret is to use them so wisely that you feel like playing freely and yet accomplish things.

What is your favorite curse word?
Perkele. Its sound resembles a bit of growling and that is why dogs also understand it.

What sound or noise do you love?
The sound of flowing water. Sometimes you can hear the sound springing from a mossy forest floor without seeing the water. That is the moment of laying head down, listening and surrendering to a moment of revitalization and mystery.

What sound or noise do you hate?
Too frequent announcements in a train, they stop the flow of writing.

What profession other than your own would you like to attempt?
“Psychiatrist of places”. The job would include understanding everything about places, being present for them, supporting them to fight for their rights and flourish in their best.

What profession would you not like to do?
Nuclear missile operator (we have known such a guy and he also ended up leaving the job and becoming a shaman instead).

If Heaven exists, what would you like to hear God say when you arrive at the Pearly Gates?
“This is the place where all those spruce tops pointed, welcome!”