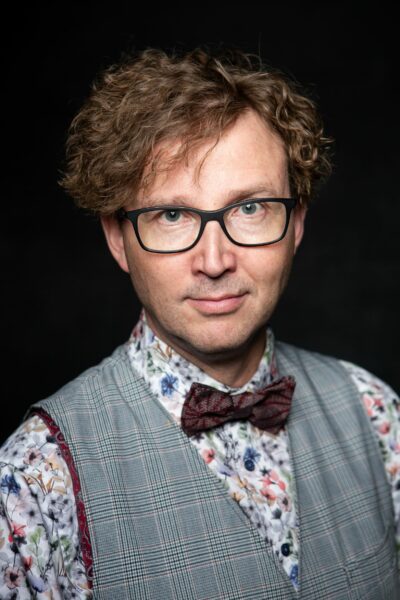 Your newest novel, the Botnia Prize nominated The Quantum Gnomes, is an amazing fusion of action thriller, fantasy and sci-fi, following a group of gnomes, physicists and an author called Antti Leikas trying to save the universe from ruin. Described as “delightfully bonkers”, one can find quantum physics, theology and mythology on the pages, and even God makes an appearance. How did the story come about?

I have always loved stories of gnomes and have figured out that there must be something truthful behind the tales. And on the other hand I have not learned enough about physics, which gives, after all, answers to everything we might like to ask. Besides the Holy Bible, that is. So now was the right time to find out how particle physics affects us all.

The Quantum Gnomes has been praised for its humour and warm wisdom and compared to Douglas Adams’ and Terry Pratchett’s work among others. How would you yourself place the book, and did you have some literary inspirations for it?

This is always difficult… but probably Kurt Vonnegut and Johanna Sinisalo would be the most direct sources at this point. And Tolkien, Hergé and Tove Jansson, obviously.

You studied particle physics for the book and even asked for feedback from a cosmologist. Did it have an effect on the plot? Does one need to understand how bosons work to be able to enjoy The Quantum Gnomes?

The feedback affected some minor details, but not the plot itself. ”According to physics this doesn’t make any sense”, commented the cosmologist once the time had been stopped in the book. About bosons: It’s good if you understand that they can’t be understood.

Who would be the ideal reader of The Quantum Gnomes?

The one who thinks that a book handling gnomes and particle physics can’t be interesting.

In the book, gnomes are actually some kind of fungi, using their mycelia to connect to each other – and the universe. As it is now known that fungi are key players in the complex ecosystem called life on earth, are gnomes something we all should be more interested about?

Most certainly yes. For example fungi can have tens of thousands different genders, and the same applies to gnomes – in fact, they all represent a different gender, namely the one of their own. So – our binary attitude to genders should at least be carefully re-considered.

You have previously written another book about gnomes, and a trilogy about office culture. What are your plans for the near future? What can the readers expect?

I must confess that there will be one more book about gnomes. A trilogy was not in my mind – in fact already the second book about gnomes was somewhat a surprise to myself. It just started to write itself in my subconscious. The same has happened already with the next one.

Aawww… A shovel. Lapio in Finnish. Does this need an explanation? I have one, if needed.

Dambghtderwambcadler. I guess this doesn’t need an explanation, because my dislike is obvious.

Bassza meg a Szuzmária. It’s Hungarian and I have forgotten what it means, but it sounds really effective.

When milk boils over and starts burning on the stove.

I liked your books, but one correction: I do understand something about particle physics. Quite a lot, in fact. (Of course I hope that the Almighty speaks Finnish in Savo dialect.)