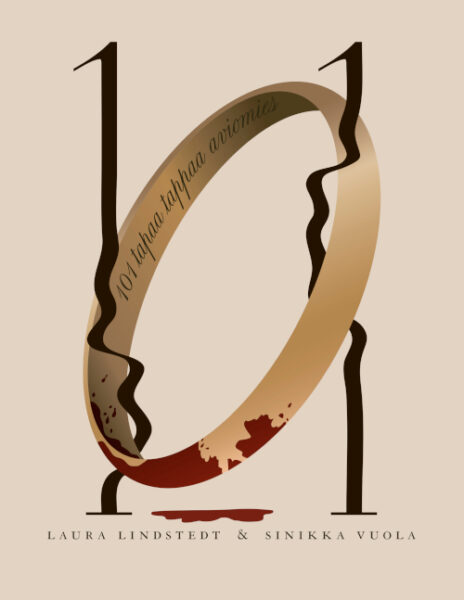 An Oulipo-esque murder mystery that twists a real-life tragedy into 101 wild and meticulous poses.

In October 1981 Anja B. from Finland took a shotgun to her Norwegian husband Thorvald’s chest and fired. He died immediately. On the 5th of May 1983 history was made as the District Court of Oslo not only released her from the murder charges but found her late husband guilty because of the physical abuse he had inflicted on her for years.

The case has now shapeshifted from the subject of tabloids and crime magazines to a methodical murder mystery by Laura Lindstedt and Sinikka Vuola. The book serves us Anja B.’s story via different methods and various narrative styles that are in turn witty, surprising, touching, skilful, or garnished with a dose of gallows humour.

The writers break the dismal convention of crime stories that begin with the discovery of the body of a young woman. This time, it is the violent husband who dies – 101 times over. The variations of Lindstedt and Vuola dazzle the reader whilst they unravel a tragic story of domestic abuse that ended up in the tabloids.

“Laura Lindstedt and Sinikka Vuola’s book 101 Ways to Kill Your Husband shows us how literature that is mindful of its form can be sociopolitical as well as entertaining. […] It succeeds in stretching its source material to all directions. The pages convey a joy in writing. […] The text shows a rare prism of gendered violence.”
– Helsingin Sanomat newspaper