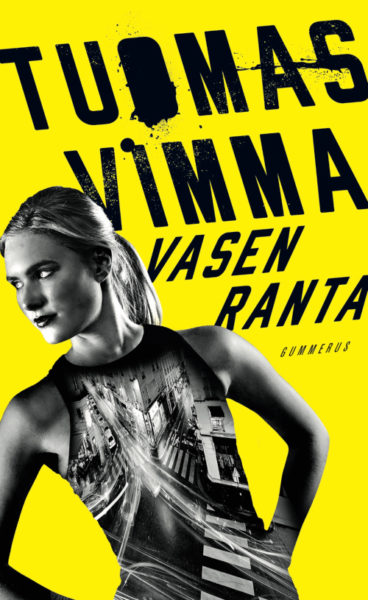 Delicious Parisian flair develops into a fever-pitch, tightly wound action thriller where the most leathal weapon turns out to be a female soldier from the Finnish reserves.

A nail bomb explodes at an outdoor café in central Paris. Blood-spattered croissants are trampled by the fleeing crowd, and France is put under martial law.

A Finnish woman named Kristiina perishes in the attack, and her twin sister, Katariina Päivänsalo, arrives to settle her estate. Soon Katariina’s path crosses with Maxime, a Parisian wedding photographer who was there on that fateful morning, and took the most important photo of his life. The problem is that the photo reveals things about the attack that many people would prefer to keep permanently hidden. Soon Maxime and Katariina find themselves led by the gorgeous drug dealer Camille through the Paris catacombs, pursued by an enemy who’ll stop at nothing.

Left Bank pits French special forces against a female lieutenant in the Finnish reserves, mixes in an old fugitive Corsican separatist and adds loads of local spice and humor. The result is an action thriller unlike any you have read before – a surely targeted grenade toss of a book.

“The women in the book are active and independent. This is typical for Tuomas Vimma, but it’s still a rare treat, especially in an action thriller. Vimma plays with the usual story lines and plot twists of the genre in other ways, too: the motifs of fugitives in extremity, secret conspiracies, and terrorism are crafted with care, but also with humor. […] The result is a truly clever and fast-paced thriller. What’s lost in realism is made up for in his exuberantly affectionate portrait of the many faces of Paris.”
– Helsingin Sanomat newspaper.