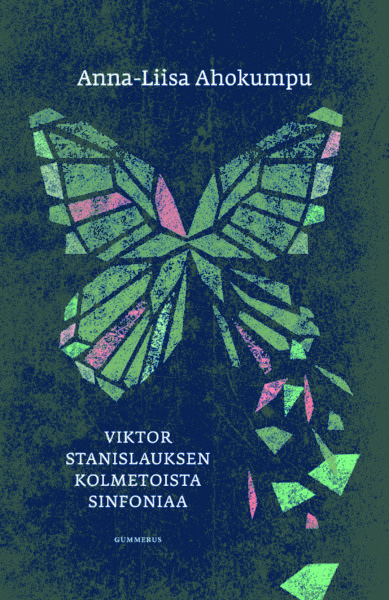 The butterfly collector Max Halma has dedicated his entire life to his subject. When his mother dies and a rare butterfly is found among her effects, he dives still deeper into his work. The butterfly may lead him closer to international recognition than ever before.

His mother’s death, however, also forces Max to examine his own past: his father, about whom his mother rarely spoke. Documents show that his father drowned a week after Max’s birth, and that the body was never found. The deeper Max goes in his investigations, the more questions arise. What really happened to his father in the spring of 1942?

When the tracks lead from archives in northern Finland to a brilliant pianist’s last concert in Hamburg, the secrets of the past begin to be revealed.

Anna-Liisa Ahokumpu’s tender first novel is like an enigmatic concert from a family’s life: obsessions, family secrets and voices that should not be silenced.

The novel was nominated for the Helsingin Sanomat Literature Prize, given to the best debut novel of the year, also for the Botnia Prize and the Lapland Literature Prize.

“A novella that doesn’t expand beyond its limits is a disappointment. […] The Thirteen Symphonies of Viktor Stanislaus does expand, beyond all measure.  […] Ahokumpu writes prose that is skilfully artistic. We can say this: when a butterfly beats its wings during the war near Rovaniemi, people will suffer the consequences for decades – and at some point, in Germany, their actualisations, symphonies.  […] [The novel  ] leaves a trace in its readers.”
– Helsingin Sanomat newspaper

About the author:
Anna-Liisa Ahokumpu