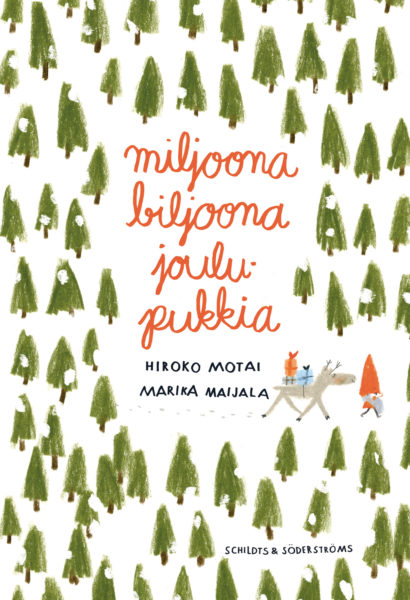 Captivating Christmas story for all the small and big ones.

A long time ago, there was only one Santa Claus in the world. And there were very few people and very few children in the world as well. Santa Claus could easily hand out all the world’s presents in a single night.

As years went by, the number of people grew. The number of children grew, too. The sack of presents became too heavy. So Santa Claus asked if there might be two of him. Two Santa Clauses were twice as fast as one, but only half the size.

As more years went by, more and more people and children came along and the number of Santa Clauses grew and grew–and at the same time all the Santas grew smaller and smaller.

Finally there were a million billion Santa Clauses in the world, invisible to the eye and obviously too small to carry presents. What happened then?

The book was awarded the Most Beautiful Book of the Year prize in 2014.

“The biggest Christmas surprise has come in the form of a Japanese-Finnish collaboration. In a word: captivating.”
– Helsingin Sanomat newspaper

“Beautifully rugged, transparent crayon illustrations determine the appearance of this wonderful book. The tiny pieces of text are either within illustrations or in the margins. The illustrations change from totally grey images of a city to an almost empty page drawn with a controlled and amusing style.”
– The Most Beautiful Book of the Year Award board