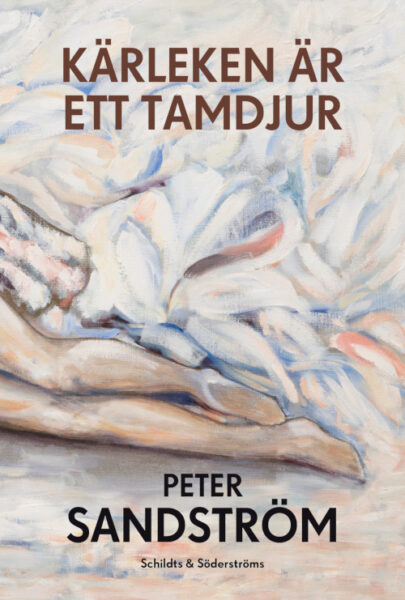 A mother, a sister, a daughter, a wife and 29 other women; an aging writer; a world off its hinges.

Writer Peter S’s sixtieth birthday is nearly at hand. Old age hasn’t come alone, and to him, alcohol is far more appetising than being the head of the Writer’s Guild. His grownup children are independent beings best admired from a distance. A bout of illness has transformed his mother, an erstwhile force of nature full of resources, into confused and slow old woman. His once close-knit relationship to his sister now resembles a tickly cough.

There is a new gap, a deep and seemingly unsurpassable ravine between Peter and Darling, his dear wife. To top it all off, Peter has contacted 29 women who have written to him after reading his interview in a magazine. One of them is the relentless Bear whom Peter cannot cut off nor live without.

Love is a Tame Animal is a restless, enchanting, irritating story in lapidary prose about a man who ends up in a limbo after a change. However, all the friction and his tribulations are full of beauty and lopsided humour – not to mention an epiphany that his life is governed by women: his mother, his sister, Darling, his daughter Bonnie and Bear.

“Peter Sandström is writing from the heart. He describes with deftness and warmth the relentless passage of time and the marks, good and bad, we leave in one another. Recognising what hurts the most, Sandström gives words to grief and fear that may arise at the moment of losing one’s loved ones.
Few writers are able to describe despair and melancholia like Sandström without making it sound weary or forced. He is downright superior when writing about the raw and painful spots in a person’s soul.
As in his previous work, his text is laden with liberating humour. It softens the gnawing insecurity and uncertainty imprinted on Peter’s image of himself and other people. His awkwardness is based on uncertainty and bashfulness, a gnawing sense of inadequacy.”
– National broadcasting company Svenska Yle

“It’s astonishing how Sandström manages to show without grand gestures, prolixity or highfalutin pathos how our relationship to our nearest and dearest are painfully intimate and constantly in a state of flux. The people closest to us have grown on us, all the while being completely foreign. His simple, concrete words join each other and are charged to the utmost – not to the point of exploding, but a quiet vibration. […] Sandström is undoubtedly one of the best Finnish prosaists writing in Swedish in the 2000s.”
– Hufvudstadsbladet newspaper

About the author:
Peter Sandström