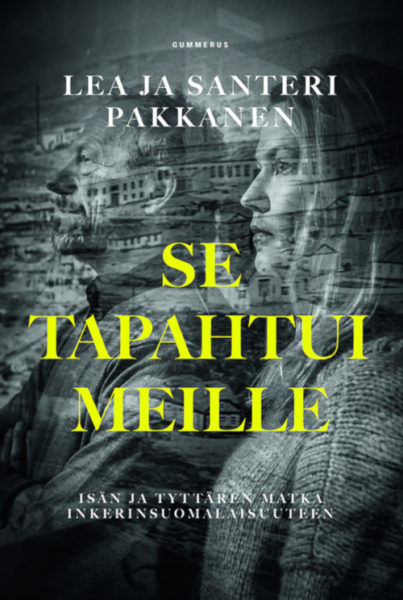 A father and daughter’s journey into the nightmares of their family in the Soviet Union during the twentieth century.

In Lea Pakkanen’s childhood the story of her grandmother’s exile to Yakutia in Siberia, where she caught fish in the Arctic Ocean with her bare hands, seemed to her like an unbelievable fairy tale.

Lea’s grandmother was an Ingrian Finn – a member of the Finnish minority that lived in the Soviet Union. Stalin’s persecutions wiped out minorities and dissidents, and by the end of the 1940s the Ingrian Finns had been decimated by deportations, executions and prison camps.

The fate of the people who survived became a taboo that could not be discussed until the end of the Soviet Union.

It Happened to Us describes the journey of Lea and her father Santeri to the places where their own family experienced the horrors of the persecutions. Father and daughter follow in the footsteps of a grandmother exiled by riverboat to Yakutia on the shores of the Arctic Ocean. They trace the fate of a grandfather, who ended up in the infamous Gulag in Northern Siberia. Eventually their journey takes them to the suburbs of St. Petersburg, where Russified neighbourhoods stand on the site of mostly purged Ingrian villages.

During their travels, Lea and Santeri look back also at their own journey from the post-Stalin era Soviet Union to modern day Finland. The cracks in Soviet totalitarianism that appeared in the 1980s allowed for a short Ingrian revival, which was cut short when most moved as returnees to Finland, a country that no longer remembered them.

It Happened to Us fills in the history that was silenced, but also makes accurate observations on the relation between state and identity, the role of minorities in national history narratives, and the importance of remembering and forgetting in families.

About the authors:
Lea & Santeri Pakkanen