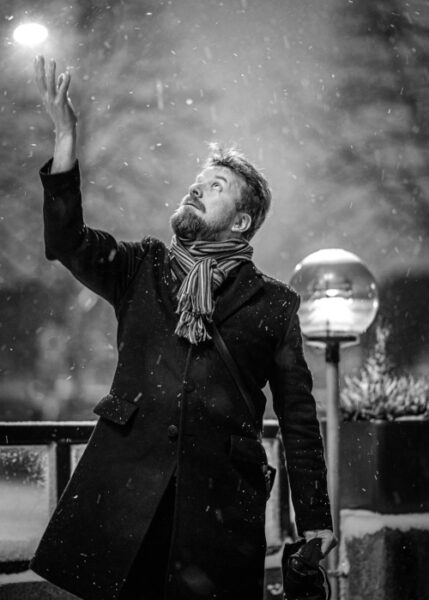 In January, HLA is celebrating its 4th anniversary. We had our ups and downs along the way, but from the beginning, one thing has been consistently praised: our style. Our agents would hardly have a meeting where a publisher wouldn’t mention how elegant and beautiful our catalogue or logo is. The man behind it is one of the top typographers in Finland, Petri Latvala – a man who seems to have come straight out of a 19th century novel, somehow ending up in our time.

HLA logo, catalogue and more recently its podcast’s design have received much praise from publishing professionals and readers all over the globe for its subtleness and style. No doubt that you are one of the top typographers in the country. But during our collaborations you have proved to be rather knowledgeable in more than one field: translations, classical languages, not to mention world literature. Tell us a little bit more about your background. Would you agree that it also plays a role in your evolution as a typographer?

Three disciplines of mine – typography, philosophy and classical linguistics – have become inextricably intertwined. All of them deal with certain structures, tend to emphasise form over substance, as one might say.

The main constituents of traditional grammar are morphology, inflection and syntax. Typography as such could be understood as a supplement to these: e.g. the choice between titling and text figures, utilising small caps and all caps etc. are strictly related to orthography. In the age of Unicode there is no excuse to avoid letter combinations like Kırkağaç, Liepuoniūtė, Nagykőrös or even τὸ γνῶθι σαυτόν. There is little room for self-expression or negligence here!

All these branches of knowledge are bound up with strong historical sense as well. Tradition is ubiquitous. It is vital to keep scrutinising the predecessors and ask what have they done and why have they done it. The tradition mustn’t be disregarded without lethal evidence.

“Don’t judge a book by its cover,” they say. But don’t you think that the first impression – i.e. the looks – brings credibility, a sense of professionalism to a company or project, or a book, for that matter?

The cover must be judged by the book!

It’s a commonplace that the sheer amount of semantic stimuli has made it difficult for covers to stand out in the ambient noise. Accordingly, the decisions concerning the design are frequently made by not studying the text itself but rather rivalling titles. Examples of generic book covers can be found everywhere. Speaking of visual identity, everything gets easy: a brilliant idea and its rigorous implementation are required – nothing more.

Stanley Morison’s credo was early brought into my attention by my father who ran a printing press: “Typography may be defined as the art of rightly disposing printing material in accordance with specific purpose; of so arranging the letters, distributing the space and controlling the type as to aid to the maximum the reader’s comprehension of the text.” And: “Typography is the efficient means to an essentially utilitarian and only accidentally aesthetic end, for enjoyment of patterns is rarely the reader’s chief aim.”

As a young designer I found these formulations both annoying and unimaginative. Little did I know. It is the very duty of a typographer to make himself invisible – the aims of a graphic designer can be quite the opposite.

What is the most ambitious project you have worked on? And which one was the closest to your heart?

The correct answer would be: “The most ambitious project will always be the next come.” Be that as it may, collaboration with the Finnish Literature Society at the turn of the millennium gave rise to a number of titles which seem difficult for me to surpass. My heart will be probably broken, but I hope at least a line or two of my work with ancient Greek authors could be published some day.

Are you an ardent reader? What kind of literature do you enjoy the most?

If typography, philosophy and linguistics represent form, the literature is pure substance to me.

Contemporary prose is something I rarely cling to. Ancient poetry (Homer, Archilochus, Greek Anthology) as well as philosophy (The Presocratics, Plato) remain necessities. And I very much enjoy perusing old grammars and dictionaries – which can hardly be classified as literature. Liddell and Scott’s Greek–English Lexicon with its thousands of pages is a marvel to behold.

Owing to the fact that I prefer reading novels in Finnish, it might be worth saluting a number of translators here: Erkki Kirjalainen has loaned his voice to mighty José Saramago, Matti Rossi is Jorge Luis Borges, Kersti Juva charmingly is both A.A. Milne and Laurence Sterne. Regarding poetry, I feel inclined to study the original text if decipherable, but the help of bona fide scholars remains indispensable: Jaakko Hämeen-Anttila is Gilgameš to me, my friends Juhani Sarsila and Miika Pölkki may represent Anicius Manlius Severinus Boëthius and Ren-in respectively.

Who is your favourite HLA-represented Finnish author?

Mr. Juha Hurme. His Headland would have made Monsieur Diderot, La Pantophile himself, satisfied. Hilarious tapestry spans from the Big Bang via various interrobangs to the dawn of The Grand Duchy of Finland.

It must be confessed, as well, that I have recently spotted some fresh species of the family Awelings (q.v. Kärkkäinen, Tuomas: The Illustrated Book of Awelings, S&S, 2021).

What is your favourite word?
ματαιοπώγων [mataiopōgōn] (Ancient Greek for ‘having a beard in vain’).

What is your least favourite word?
Kuluttaja (in Finnish: ‘the one who consumes’).

What turns you on creatively, spiritually or emotionally?
Since all my forests are lost, the answer must be BWV 639, “Ich ruf zu Dir, Herr Jesu Christ” from the Orgelbüchlein by J. S. Bach.

What turns you off?
Hubris in its countless manifestations.

What is your favorite curse word?
[…] i.e. abstaining from utterance.

What sound or noise do you love?
Courtship calls of any kind.

What sound or noise do you hate?
Tinnitus.

What profession other than your own would you like to attempt?
Poet.

What profession would you not like to do?
Change agent – or any clergyman.

If Heaven exists, what would you like to hear God say when you arrive at the Pearly Gates?
“How the hell did you get in?”

You can find Petri’s work here and here.