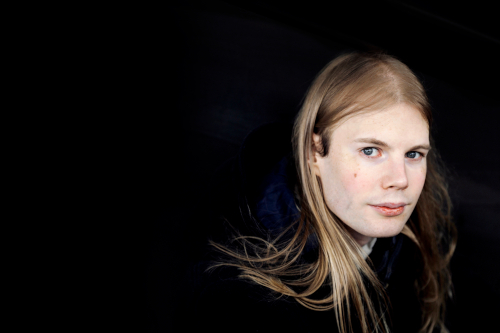 We at the agency anticipated that your fourth novel Matara will be one of the biggest literary events of this autumn. Yet the reception by critics and readers alike has surpassed all expectations. Matara was nominated for the Torch-Bearer Prize and is now also nominated for the biggest award of the year, the Finlandia prize.

First of all – congratulations! How does it feel to be in the centre of so much attention?

Thank you! Becoming a target of attention makes me happy of course, if new readers find their way to the book. However, it also makes me think how every book is always at least two different books: the one my friends have read and commented on, and the one that can be found on the shelves of the bookstores and that is connected with different kinds of images, for example, nominations for literary prizes. For me, the former is the most important; the attention, however, tends to concentrate on the latter.

Matara is a story about serious fantasy games of childhood. Boys of a summer camp spend their days in the realm they have built – the Republic of Matara which has its own law, social structure, plotting for power and bonds between citizens. Just as any real state. Under the guidance of his older brother, a young boy trains to be a scout. Could you please tell a bit about the roots of this story?

I lived an exceptional childhood in one of Helsinki’s bosky outskirts, a kind of a backcountry. In the nearby woods, entire hut-cities and states were erected – it is difficult to even grasp the scale of their political and economic systems. Especially nowadays, when large gangs of children and their games become rarer and rarer.

At least as long as I have been a published author, I have been aware that I should try to depict the games of my childhood. With the same clearness, I also understood how utterly impossible it would be to write about them. 12-year-old boys creating their own architecture or economic theory. Who would even believe it? For a long time, I had no idea how to write about my own history so that I would get it right. Until one day I just knew. I have a very strong experience of how the books are given to me as if from the outside. A kind of a voice tells me that this is how it should be done, this is how it should look like. The voice says: step aside and let me speak on behalf of you. And so I step aside.

Mikhail Bulgakov is said to have collected extensive notes about the social, military and power structures of the Roman Empire of the 1st century before setting out to write The Master and Margarita. The same holds true about Lion Feuchtwanger and his Josephus trilogy. Paradoxically, solid knowledge about historical details gave both authors a kind of freedom when it came to creating a fictive world. What books did you read, what was the groundwork you created your novel on?

To me, literature is first and foremost a way to love the world in its fantastic abundance. As for Matara, it is also about taking its world seriously. If I want to do justice to those boys and their reality, the book has to be rich in terms of the world it creates, and in terms of language as well. The boys’ games are inspired by ancient Rome, so I hunted out old classics from my shelves: Caesar, Cicero, Plutarch, Tacitus and so on. For the dialogues, I learned, among other things, the slang of the Finnish soldiers in the 1930s.

I wanted the wild and lush forest to be a counterbalance to the rich culture created by the boys. I read a wide variety of books about Finnish wilderness and wildlife in general. In the beginning, I just wandered several summers in the forests with my notebook. I tried to move like the characters in my book, to creep, crawl and climb, so that the text would feel physical.

Two world literature classics come into mind when it comes to political societies created by adolescents: Lord of the Flies by William Golding and The Paul Street Boys by the Hungarian writer Ferenc Molnár. What is your personal relationship with these novels and the world they describe?

When I was a kid, a boy living next door once came to tell me that his dad knows a book where the boys play exactly the way we do. “One of the boys dies in this game, he dies for real!” the boy explained, his eyes like saucers. He was talking about Molnár’s The Paul Street Boys, of course. The death of little Nemecsek terrified us, because it revealed a taboo related to games. Namely, in games, it is appropriate to die in several ways as long as one does not expire so that flesh actually rots from around the bones.

Later on, I have certainly learned that the proscription concerns only modern games, as one can read from Johan Huizinga’s Homo Ludens, for example. Anyway, Molnár’s novel has accompanied me all these years and it has been the most important inspiration for Matara. William Golding’s Lord of the Flies is often mentioned in connection with Matara, but in my mind, it represents precisely the kind of bias that Matara opposes.

Using a child’s point of view is an extremely intriguing and challenging ploy in fiction. Based on your own experience, both as a reader and a writer, what are the biggest advantages and traps in such an approach?

Children are considered to be childish. Their capacities are underestimated and their actions are evaluated according to the criteria of the grown-ups, not their own. Things that are connected to childhood are remarkable only regarding a person’s broader life story, his individual growth, becoming one’s own self.

I have called addressing these problems “correcting the refractive error”. If time twists our perceptions and bends the memories of childhood, a novel has to fix this error by twisting into another direction. If attention is generally focused on the whole life story, the task of a novel is to dispel it and focus on life in games. If everything about children is constantly belittled, a novel has to magnify it.

Along the way I realised that the process involved a different point of view in many other ways as well. The thing is, if you succeed in depicting the realms of childhood, you simultaneously delineate the borders of the worlds and travel from life to death and back. It is a mind-boggling experience.

How do you write, how do you find the right voice?

It is often said that a writer has to find their “own voice”; I, on the contrary, try to get rid of my own voice. I write the same stories until some twitch happens and I get the feeling that someone else starts talking through me. A ghost’s speech I have called it, although ghosts do not necessarily need to be taken too mystically.

Close to where I live, there is a an island that is reserved for dogs only. Sometimes I go for a walk there and when I observe the dogs’ ongoings, I always think that an ideal reader would be a dog. Someone who reads the terrain attentively, finds the whiff and follows it. Someone who gets so excited about tracing, that pure joy makes his body shake. Someone who stops to examine small details, then rises his muzzle to consider the broader whole. Someone who leaves down his own marks and digs holes. Someone who can howl, who is courageous, is not afraid of the grotesque and who can easily cross the borders of the worlds.

What is your favorite word?
Secret.

What is your least favorite word?
Normal.

What turns you on creatively, spiritually or emotionally?
All kinds of crossings.

What turns you off?
All kinds of narrow-mindedness.

What is your favorite curse word?
Perseenreikä (‘asshole’), just because of how it sounds.

What sound or noise do you love?
Seagulls.

What sound or noise do you hate?
Rubbing synthetic fabric.

What profession other than your own would you like to attempt?
Most preferably something I could not even come up with myself.

What profession would you not like to do?
Teacher.

If Heaven exists, what would you like to hear God say when you arrive at the Pearly Gates?
“Wrong gate, my friend.”