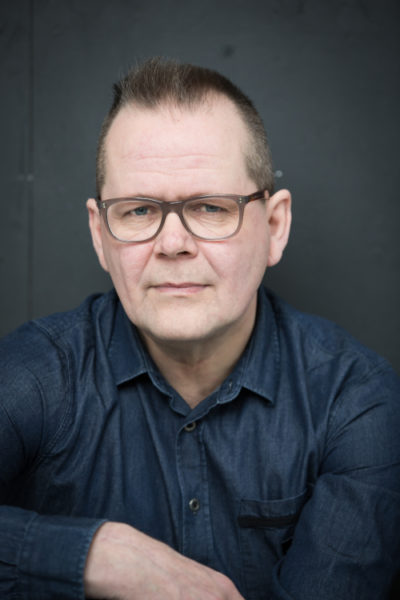 I often describe your newest novel Story as a satyrical dystopia. It talks about such a future and life that is not at all impossible in our world, and its humour, as well as the absurd details in the novel, often seem to be mocking our present life – the one of exaggerated self-importance and endless stories we feel obliged to share with everyone else. Would you agree with such description?

Everyone reads the novel in his own way. If it sounds like a satirical dystopia, I can accept that. As a writer I must accept all ways of reading. The reader is king or queen and I’m his cook.

You have been writing for years now, and previously published several widely popular books, including an already almost legendary nonfiction The Unknown Kimi Räikkönen. I’d say that Story marked a stylistic change in your fiction: the narrator seemed more anxious, more concerned, perhaps even angrier. Is he?

The narrator in this book is angry, sad, hilarious, crazy. I wanted to see what happens if you just let it go and try not to behave so well.

The novel has been a bestseller since its publication in August 2020, selling well over 30,000 copies in Finland. Were you surprised by the popularity? What do you think that tells about today’s reader?

It’s very dangerous if writer starts to think things like success, sales and so on. Of course it’s nice if the book sells a lot, but it’s not the the main thing in the process. While writing, you must not think anything else, and in my case I’m sure that the success of the Kimi book helped the novel Story.

In a world over-flooded with stories – such as it is now with the internet and social media, and an overwhelming amount of great books, films and quality TV series – is it harder for a writer to be original?

I think that it has always been hard to be original, cause story-telling is such an old practice in our history. Every story has already been told thousands of times and every writer tries to add something new to it or create a new way of seeing things. You must know or at least accept Shakespeare while you’re writing plays, and you must know Samuel Beckett if you try to write something odd, wise and funny. Writer must think that he/she is original even if it’s nearly impossible.

I don’t know the future and it’s the best thing in this job. At the same time, you must forget the past and start to write your first book again and again. White paper is the most beautiful paper.

What is your favorite word?
Tä? (Finnish for “What?”)

What is your least favorite word?
Positive (cause it means all and nothing at the same time)

What turns you on creatively, spiritually or emotionally?
Other people and Beethoven. (Last week is was Lucinda Williams and Lydia Davis)

What is your favorite curse word?
Perkeleen perkele!

What sound or noise do you love?
My love’s laugh.

What profession other than your own would you like to attempt?
Taxi driver.

What profession would you not like to do?
The undertaker.

If Heaven exists, what would you like to hear God say when you arrive at the Pearly Gates?
Welcome Kari, we have strong coffee here, and by the way, here you can smoke those little cigars everywhere, and the sauna is on all time. So, enjoy!