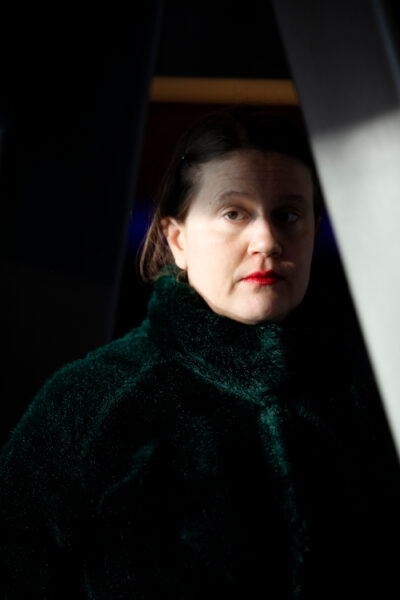 E. L. Karhu, the author of a stunning debut To My Brother, answers HLA questions

Best known as a playwright and dramaturg, your rewritings of classic plays and explorations of new dramatic forms, such as Princess Hamlet (2017) and Eriopis (2020), have received acclaim in Finland and Germany. To My Brother (2021) is your first novel. Apart from the fact that you have studied dramaturgy at the Theatre Academy of Finland, which probably offers the best and most versatile writing education in Finland, what urged you to try prose?

I work very intuitively; one day, the main character just appeared and started talking to me. So I cannot say that I was determined in any way to try out a new genre – the work just independently took that specific form. I enjoyed a lot doing something else for a change. In theatre, there is a whole machinery revolving around the text, so in the case of my debut novel, it was fun to frolic about in peace.

That said, I’ve always had a great literary ambition even when working on my plays. For example, the form of my play Eriopis – which takes a playful approach to this massive bulk of post-dramatic text – is, in fact, quite close to prose. Thus, writing prose was actually a natural step to take. I got inspired by writers who create the kind of prose that feels inspiring to read. I read such works as Two Serious Ladies by Jane Bowles, The Hearing Trumpet by Leonora Carrington, Mrs Dalloway by Virginia Woolf, and thought, I too, have to start writing.

My studies in the German Hochschule für Schauspielkunst Ernst Busch as well as the artistic radicalism and uncompromising attitude I have experienced in the German theatre world have also had a great influence on my writing.

In her essay Professions for Women, Virginia Woolf writes: “These then were two of the adventures of my professional life. The first – Killing the Angel in the House – I think I solved. She died. But the second, telling the truth about my own experiences as a body, I do not think I solved.”

A novel’s personal relationship to the reader is important to me. In a novel, the reader is present alone, one single body, one to one, whilst the stage and the theatre are always presumed to be public places, where the audience is a crowd. In my novel, I would like to get my hands on the reader’s body and inhabit it like a parasite. It’s been exciting to think that I will have the reader all for myself.

The monologue To My Brother is a monologue meant to be performed by more than one actor. It was commissioned by the German Schauspiel Leipzig theatre and I have worked on it in co-operation with the dramaturges of the theatre as well as with the editor of my plays in German at the publishing house Rowohlt – she saw various versions of the play during the process. In this play, two of the most prominent themes are desire and gaze, both the spectator’s gaze at the performers and the performers’ gaze at each other. The text plays with different layers of truth and narration as well as with the polarities of identification and estranging. The world premiere of this play, translated into German by Stefan Moster, was in April 2022.

This intercontextuality of working in two language spheres, the German and the Finnish one, enriches my work and enables me grow as a writer in totally different way. A play, to me, is both an independent literary work and a seed for other works, performances that can be created from it. While writing a play, I spend a lot of time etching an empty space into the literary text – a space for the director’s vision and the actor’s body. Thus the play has to be very solid and at the same time, very elastic, very flexible. The core of a play is the actor’s body, this is what ultimately carries the text on the stage.

What is writing to you?
Writing, to me, means disturbing and challenging the existing reality, as well as creating different realities and offering them to be shared. Art is a place where I can speak the truth and where I don’t need to lie or embellish or smooth things out. Tense and controversial experiences are the fuel for art, and there is no need for simplification. To me, personally, writing is also an addiction, in all its complexity, fragility and pleasure.

To My Brother is a monologue novel about an ugly sister who admires her handsome brother. The sister is a greedy loner who devours sweets and soap operas, and trails her brother like a shadow. The brother is surrounded by beautiful and sensual girlfriend candidates. The sister is a slightly socially challenged, yet an attentive geek. However, this is just the outer framework. Inside, the frantic narration of the anti-hero prompts thoughts about sibling relationships, taking care of each other, lust, body and social and sexual hierarchies.

If you had to name three most important themes in To My Brother, what would they be, and why?

In the core of To My Brother there are three themes: power, pleasure, and corporeality. I wanted to create a character who imprudently aspires towards her own pleasure and who is not punished for it. To My Brother is a novel about lust, pleasure, and living in a body in a society. I write about the public and social hierarchies related to bodies, as well as about the revolutionary potential that lies in pleasure.

To My Brother is also a play about the hierarchies of lust, the topic of lust in a society that places certain bodies in focus while silencing, shaming, or ridiculing others. My novel turns the gaze – as well as the object of the gaze – upside down and by doing this, it opens up new horizons. It traces the borders of the personal and the public aspects of a bodily experience, and challenges and exposes them.

My novel works with the themes of dominance and indomitability, but also about superfluidity, conviviality, and joy. The complex, intense, sometimes intoxicating relationship connected to hierarchies and power structures is strongly present. In turn, housework and caretaking become a mirror of a wider division of domestic labour in our social reality. With my novel, I challenge the type of main characters that generally get the microphone, as well as who gets to be the hero, and in what kind of a life. Quite simply, To My Brother is also a novel about siblings: a story about a sister and her brother. It speaks about loneliness, about a desire for belonging, a desire to be seen.

What are your thoughts about the dramatic genre of To My Brother?

To My Brother is definitely the funniest work I have ever written. It has an explosive, wild humour that gives me great pleasure. There is a lot of language-based humour that is born from the narrator’s unconventional way of speaking, but also quite a lot of situational comedy. The essence, however, is mobile, unknown and also dark. The novel is multilayered and multidimensional, and laughter in it is a Brechtian tool for recognising the things and elements in our society we generally prefer not to name. I have consciously aspired to write a novel that cannot be subject to one single interpretation nor fits into one category only. Thus it continues its life in the reader’s head and body even after the reading, and evokes a process in the reader instead of finishing it.

How would you place yourself in the big picture of world literature: who are the authors you are having a dialogue with (and why them)?

In her column for The Guardian, Elena Ferrante writes: “Stories about heterosexual relationships interest me when they stage a violation, large or small, which doesn’t conform to canonical representations. Stories with no beautiful women, for example, but ordinary ones. Or beautiful women who later reveal a physical defect. Or a handsome man hopelessly in love with a very ugly woman. When I find stories of this type in books or at the cinema or on television, I think they should be treasured, because they are small doorways through which we can glimpse different ways of narrating sex.”

This thought was one of the leading ideas during my writing process. I wanted to reveal the experience of desire and pleasure from a different angle than we generally see it, and to describe the process of craving and sexuality in itself – not the way it would be depicted if the main purpose was to excite the reader.

With my background as a playwright and a sociologist, the influence of Berthold Brecht on my political-artistic thinking is indisputable. His view that art is capable of describing the world to us as if we saw it for the first time, so that the hierarchies and imperfections become visible, has definitely had its impact on this novel.

Leonora Carrington’s savage, untamed and multilayered narrator’s voice in the short story The Debutante, as well as in the novel The Hearing Trumpet, has had a great influence on my novel. Undoubtedly, Carrington’s humour and her main characters’ attitude towards the world are closely related to my work. I consider Jane Bowles to be Carrington’s kindred writer: Bowles’ black humour and astonishing ability to depict both absurd and true situations continue to inspire me time and again. Édouard Louis’s uncompromising gaze on social hierarchies and his work on the embodiment of class keeps nourishing my literary and social thinking. In Édouard Louis’s writings, both body and desire are essentially political, which is in accord with my own experience of the world, my understanding of society, ant the ethos of my novel.

What is your favorite word?
In Finnish, one of my indisputable favourites is “hömppä” (“fiddle-faddle”). It is a playful and bubbly word describing things that are enjoyably light and that the society tells us are not to be taken seriously.

What is your least favorite word?
I don’t have least favourite words; all in all, everything is about context.

What turns you on creatively, spiritually or emotionally?
Surprise.

What turns you off?
Stuffiness.

What is your favorite curse word?
I like the Finnish “saatana”, which literally means the devil. It has a lovely long “a” and a nice strong idiomatic ending.

What sound or noise do you love?
Laughter, especially each person’s own idiosyncratic laughter, when goes beyond appropriateness.

What sound or noise do you hate?
The omnipresent background hum of a motorway in an otherwise very beautiful natural landscape.

What profession other than your own would you like to attempt?
I used to dream of being an interpreter and even studied a bit of interpreting at the university. I love the process of surrendering to another person’s speech and reproducing it in a language that is mine. You can really get hooked on the physical high of interpreting, there is a very strong physical flow involved.

What profession would you not like to do?
The job at the post office was a nightmare. I had no idea about the responsibility that was involved. Whether someone could be sued for their crimes or not depended on the fact whether you had remembered to take the signature on a form. Not to mention the amounts of money moving through the cash machine. I didn’t have a clue. I quit after two weeks; I have no idea why they didn’t throw me out earlier. These experiences feature in To My Brother, though the character is a lot better at the job than I was.

If Heaven exists, what would you like to hear God say when you arrive at the Pearly Gates?
“Care is abundant here.”