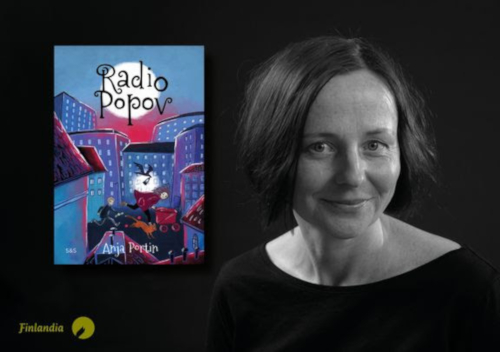 The chooser of the Finlandia Prize winner traditionally writes a letter which at the same time describes the grounds for the choice and is also a personal message to the author. Finlandia Junior winner this year was chosen by actor Christoffer Strandberg.

heartfelt thanks, thank you for reminding me that fantasy and empathy are what make us human.

This book was read and loved by three Christoffers at once. The first Christoffer was the boy I was at the age of about nine. He experienced this book as a great, thought-provoking adventure. The second Christoffer is the man I am now. He saw the social layers of Radio Popov, its skilful narrative and the colours of life’s comedy and tragedy.

The third Christoffer was the father I hope I will one day be. The father who, with laughter and thoughtfulness, reads this book with his own children. As he does so, he wonders how anyone could ever abandon a child, at the same time conscious that families are breaking up, for different reasons, all the time.

I have always believed that a good book for children or young people is one that you can return to throughout your life, always finding new perspectives and realising that it has been at the heart of the matter all along. This is such a book.

When I first picked up a copy of Radio Popov, I was a question-mark. Popov? What did it mean, and what was the meaning of the picture on the cover? And why ‘radio’ – was this a book about a radio programme? Hmm.

Well, then I opened the book, and I will never close it. The story and characters of Radio Popov live on in me.

I realised that radio is a kind of literature. Its sound waves in the ether and the words of a novel convey the same thing: the human voice. I can hear the voice of the main character, Alfred, all through Radio Popov, because the story is told from his perspective. Alfred is convincing, honest, funny and moving.

And I must praise Miila Westin’s illustrations, too! The pictures support the story and give rhythm to the text. The words have time to sink in to the reader as they examine the illustrations, a bit like the words of a song during an instrumental passage in music.

Radio Popov doesn’t have much of a slip road: you’re on the motorway at full speed on the very first page. The world of the book doesn’t need to develop its colour separately from the plot – this happens organically. The reader falls into Alfred the Forgotten’s ongoing destiny and cares about him immediately when he explains:

“Everyone who tells stories knows that they have to have some kind of beginning. Something that sets the events in motion. Some stories have their beginning in a cataclysmic upheaval, such as the eruption of a volcano or someone being born or dying. Or someone getting something amazing in the mail. Others start with an absolutely tiny idea, for example someone deciding to try out whether they might get to sleep better on the hall floor than in their own bed.“

The book’s world – its time and place – fascinates me. It succeeds in being timeless while also being completely of our time. Radio Popov is a fantastical tale, but also a heart-rending story about humanity anchored in reality. The world and its people are not seen through a black-and-white filter. The parents of the forgotten children are not demonised. This is not a story about the struggle between good and evil. This is a story that focuses on the good in the small and in the large, in spite of all evil.

The presence of magic, or should I say superpowers, in this work plays a truly important part. It does not seem strange or added on, but completely logical and real. Amanda, the hero of the forgotten children, finds the abandoned children of the city with the help of her ears. She can hear the deep signs of the innocents so well that they literally twitch, revealing the location of the sigher.

For me, Amanda’s real superpower is empathy. She has so much empathy that her ears quiver when they encounter a child’s need. People like this really exist. In fact we could all be Amanda. But we are so busy, concentrating on our screens, the news and on continual growth, that our field of vision narrows and our hearing falters.

I have one thing to ask, Anja: would it be possible to meet Alfred and the rest again? I want to know what happens to them!

Does Alfred become like Amanda when he grows up: do his ears begin to twitch? Maybe the deep-pink house becomes his one day. And what about the other forgotten children? Does Iris move out from her home among the bottles? Maybe Abdi’s family will get some help so that he doesn’t have to bring up his little sister all by himself because his mother is always at work. And Alfred’s dad: does he go to prison? That could even help him; perhaps he and Alfred meet up and finally talk about Alfred’s mother.

Radio Popov is a book that entertains and educates. Children are intuitive and wise. They know how to handle emotions for which they don’t yet have words. I take off my hat to you, Anja, for the subtlety with which you have captured the way childen deal with shame and the agony of conscience.

In addition to all this, Radio Popv ils a book that encourages reading, literally. The skilful narrative has the reader turning page after page, but the main character, too, discovers the joy of reading. Both Pippi Longstocking and Uncle Fedya are read in Popov, and when Netflix is at some point mentioned, I suddenly realise that no streaming service in the world can create the images and experiences that we ourselves create when we read.

In a down-to-earth and approachable way, Radio Popov is a jubilee of empathy and imagination.

That is why it has won the Finlandia Prize. Congratulations, Anja, and thank you once again.

Translated from Finnish by Hildi Hawkins