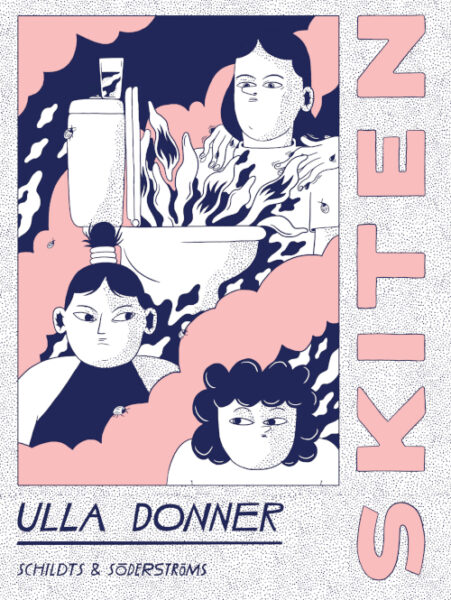 The best graphic novel in Finland digging into capitalism, potatoes and freedom.

Everyone’s vegan, a climate activist, a politically conscious intersectional feminist working on what they truly believe in. Or is everything just the same old shite but rewrapped?

An ad agency is in the middle of a restructuring and all emotions are coming out at After Work debriefs. Colleagues at Dream Hackers Disruption Agency are discussing how much freedom they actually have. Have they chosen their vocation and their way of life? Are they even able to have a say in what their lives will look like, in the future?

The launch of a new potato-based sausage is underway. The only problem with this innovation for replacing the meat is that it has almost no protein. There is a solution, but not without an additional risk.

Ulla Donner’s Crap, which was awarded the Finlandia prize for the best Finnish graphic novel in 2019, is a story about capitalism, potatoes and the will to flush yourself down the toilet.

“Both of Ulla Donner’s graphic novels have the elements that form the bedrock of the new boom for Swedish-speaking graphic novels: inner angst and social criticism.”
– Hufvudstadsbladet newspaper

“Donner’s graphic novel is thought-provoking, funny and wonderful. Her sharp analyses on the double standards of today and the development of her style are a delight to follow.”
– Kiiltomato literature magazine

“The graphic novel of Swedish-speaking Ulla Donner is a sharp criticism of capitalism and increasingly meaningless work from a point of view inside an advertising agency.”
– Kommunalarbetaren magazine

“Her text and evocative imagery are laced with careful details. Crap offers a witty, clever contemporary satire, piercing through soul-destroying capitalism and a society laden with male privilege. Her voice is charmingly annoyed, iced with dark humour. Ulla Donner stands firmly with the most interesting cartoonists of our time.”
– Ålandstidningen newspaper

“Ulla Donner’s Crap is a unique and sharp contemporary satire. Even though “The tundra in Siberia is melting” only in the speech bubble in the beginning of the novel, its most crucial topic becomes the uncontrollable nature as well as an individual’s choices and actions.
Donner’s line is funny and inventive. It picks up on the wandering hands and a woman’s anger, alongside avocado babies in the windows and the surreal tussle of sex games. Linguistic catches, monologues and contemplation all sound real and topical, which is due to Sinna Virtanen who’s translated the novel into Finnish.
Donner peppers her images deftly, almost stealthily, with little beetles, first on shoulders and coffee cups, until they grow into an all-consuming, rude prophecy. The story proceeds, however, without preaching to its reader. Under its seeming jollity runs an enormous sewage network that reeks of a man-made global nightmare.”
– Graphic Novel Finlandia Prize nomination statement

“The sharp satire questions the point of the world of advertising and lambasts its shallowness and dishonesties. At the same time, it reveals the market at its most twisted and least accountable. The story, at times reaching surreal shades, also casts a light on the inequality of women at the workplace and in society.”
– Graphic Novel Finlandia Prize jury statement

“[Crap] also shows, with a slight surrealist touch, how women are unequal at work and in society.”
– Östnyland newspaper

About the author:
Ulla Donner