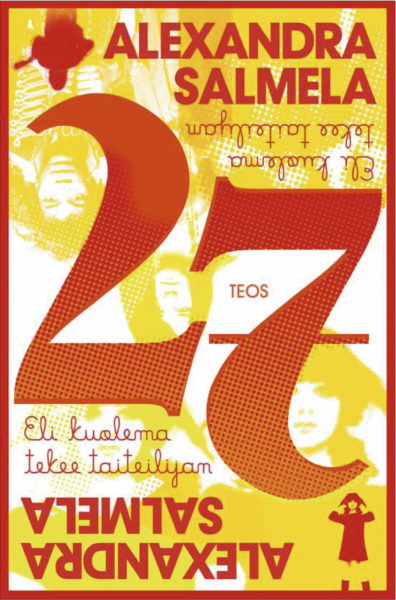 A hilarious story of a collision between artistic ambitions and realities of life.

Her idols Kurt Cobain, Jim Morrison, Janis Joplin and Jimi Hendrix all died at the peak of their career at the age of 27.

Will she have time to become a famous artist herself – and die before her 28th birthday?

When Angie winds up at a dead-end with both her artistic ambitions and her family in Prague, she decides to change the scenery for a while. Luckily, her literature teacher has just lectured with burning passion about the symbols in the Finnish national epic Kalevala, revealing to the students that he actually owns a lakeside property in Finland.

In a small rural village up in Northern Finland, a family, complete with three children and Mr. Pig, leads a somewhat chaotic back-to-nature life. When Angie, in the search for her artistic identity, moves into the sauna cabin in their courtyard, the every-day life of the family starts to waver. Alexandra Salmela’s debut novel is a charming mix of tragedy, sit-com, farce and a coming-of-age story told with self-reflective irony.

The novel was awarded with Helsingin Sanomat Literary Prize, which is given to the best debut novel of the year, and it was a nominee for the Finlandia Prize.

”The eloquence of the narration and the originality of the mindset are unlike anything experienced so far at these altitudes.  […] This is something that has long been awaited. Alexandra Salmela is making literary history.”
– Helsingin Sanomat newspaper

About the author:
Alexandra Salmela