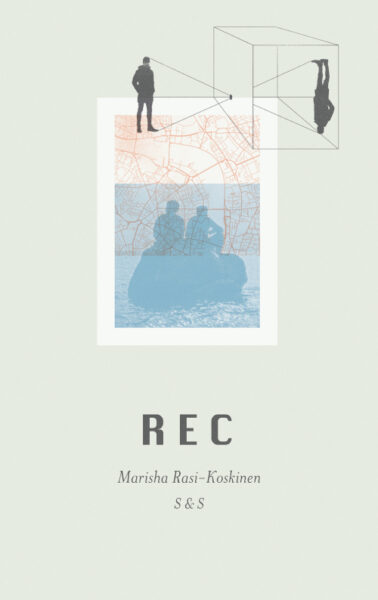 A big novel about friendship and love, power and boundlessness.

Many beginnings and endings later, Lucas travels for the first time to the city where his story began. Someone is dead, someone has vanished, and Lucas travels to find answers, of course, but it doesn’t work like that. He finds new questions, his story connects with other stories.

“If Lucas yearns for anything it’s shared laughter, how their voices resonate in laughter, how their minds do. And shared illusion. He yearns and fears. Loves and abhors. Illusion that has no beginning and no real end, and seeps into reality, permeates it as if it were organic matter. When Cole and Lucas were together, reality was flexible.”

REC is a travel book and a documentary, a fiction about fiction. It’s a breathtaking kaleidoscope where stories and reality constantly take on new angles in new hands. Once again Finlandia Prize winner Marisha Rasi-Koskinen writes herself to the forefront of the Finnish novel.

“REC is an ingenious portrayal of the time where everyone constantly takes pictures of themselves and posts them on social media. Rasi-Koskinen doesn’t give us updates on the phenomenon; instead, she dives straight into it, deeper than any other Finnish writer has ever before. Rasi-Koskinen’s novel is an enchanting mystical thriller of friendship and love, which is not bound to one place but, more masterfully so, to the era of Instagram and instant message services.”
– The Torch-Bearer Prize jury statement

“Tampere City has a great literary genius who, despite all her wonderful work and the awards she has won for it, is still not as famous as she deserves to be. (…) REC is a novel whose analysis requires much more than a newspaper review. It contains an entirely separate universe that one must experience oneself – preferably, at least twice.”
– Satakunnan kansa newspaper

“REC shatters the structure and glues together a completely new story, a twisted picture of the world. Following chaos theories and mathematical patterns, time, place and characters become a part of a seemingly arbitrary order. (…)
That way, REC becomes a visual labyrinth, gradually constructed from photographs. Instead of chapters, the reader enters chambers and halls. Bigger transitions are marked by the change of floors. Such a structural solution is not just some trick of the author; in a form of storytelling, Rasi-Koskinen creates magic. (…)
It is clear that Rasi-Koskinen has a masterful skill to stop the time and turn it back and forward so that the reality becomes obscure.”
– Turun Sanomat newspaper

“The novel is so restless and mysterious that it feels not at all unlikely that the pages would have a totally different story written on them the second time you read it. REC makes the world a little more magical place to live in.”
– Suomen Kuvalehti magazine

About the author:
Marisha Rasi-Koskinen