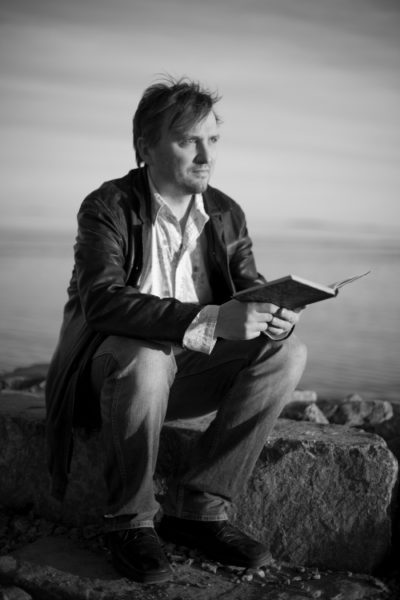 Finlandia-nominated A Dog Called Cat book series is definitely one of the most sensitive, philosophical and beautiful children’s books I’ve ever come across. Could you tell us a little bit about the beginnings of these two warm characters, a dog, whose name is Cat, and Weasel? How did you come up with the idea for the series?

There is a saying: name is destiny, or sign; nomen set omen. The series started off with that idea. The main protagonist’s mother ends up leaving her only puppy. By naming him Cat, she thinks she will also miraculously give him all the qualities that cats are usually associated with – such as independence, or self-assuredness. However, it turns out not be the case. Despite the name, the main protagonist – a dog called Cat – feels lonely, uncertain and detached.

The main idea of this book is a thought that when everyone abandons you and the world is kicking, the help, friendship and love may be offered by someone who is as abandoned. In this book, that Good Samaritan turns out to be Weasel: a homeless man with alcohol problems, who is nevertheless a very warm and heartfelt character.

Where I come from, children’s literature has long been neglected even by academics as ‘not important’ or ‘not serious’ enough. Also, still, in many countries, there is a strong opinion that certain topics shouldn’t be dealt with in children’s books – such as poverty, loneliness, death, divorce etc. Have you personally ever encountered such stereotypes? How do you think we should defy them?

I have previously written to both children and adults. As a writer, I feel that writing for children is even more important. Even though I don’t like emphasising pedagogics in my books for children, I still hope they will carry a warm message about the importance of accepting differences, as well as trust and friendship. They offer themes of tolerance and love in the world that may sometimes seem to the kids – as well as all the rest of us – cold and selfish.

Generally speaking, the main ideas of A Dog Called Cat books have been accepted with warmth; but of course, there are always parents who are displeased with something. Some have said that these books glorify alcoholism. Nonsense! If they glorify anything at all, it is friendship and empathy. Even though one of the main characters is a homeless drunkard, the books don’t claim homelessness or drinking are those values one should pursue. Quite the opposite; it emphasises, that also the poor or abandoned outsiders of the community share the same feelings and longings as all people. Drunkards also have dignity, and a stray dog or cat has a right to a dignified life, a right to love. The fear often only creates prejudice; if I can diminish some fears through my books, I will also diminish the prejudice.

Elina Warsta’s illustrations gained a lot of well-deserved praise for creating a wonderfully warm atmosphere for your books. How does the collaboration between a writer and illustrator work? Does it happen that you sometimes modify the story in order to adjust it to the drawings?

The foundation to our collaboration is creative freedom and mutual respect. For me, it is intriguing beyond words to watch what kind of world Elina creates around my stories, and what kind of new stories her illustrations bring about. It is very important to me that Elina is not “only” an illustrator; she is one of the two authors.

On the occasion of the International Children’s Book Fair, what would you wish for children and young readers?

I wish everyone love, good health and hope for the better future. I wish that all the children in the world would have an opportunity to enjoy great stories and sometimes give in to the sweet power of imagination.

Next, I will be looking for home for Dog, Cat and Weasel. After that, there are some Christmas topics in the picture, as Weasel will all of the sudden notice he is Santa – a “Poor-Man’s-Santa”.

What is your favorite word?
Kaipaus (“longing”).

What is your least favorite word?
Kateus (“jealousy”).

What turns you on creatively, spiritually or emotionally?
Nature, and a good story.

What turns you off?
When you notice that you consider something self-evident.

What is your favorite curse word?
Simpura (a mild curse, similar to “darn”).

What sound or noise do you love?
The sounds of wilderness.

What sound or noise do you hate?
Background music in stores etc.

What profession other than your own would you like to attempt?
A pilot.

What profession would you not like to do?
Life coach.

If Heaven exists, what would you like to hear God say when you arrive at the Pearly Gates?
“There is space for everyone in here – even you.”