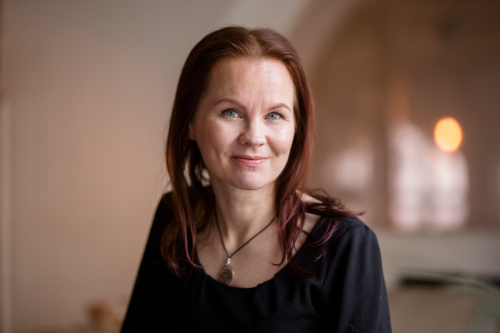 Your novel REC is unlike anything I have read before: just the sheer structure of it, the many layers and characters, the sense of photography and fragmentation, the most mysterious atmosphere – just like one critic wrote, a book review is not enough to describe its richness and uniqueness. How did you manage to not get lost in all these layers and, eventually, weave it all back together in the very last pages?

I always start with the structure. To me, the work of fiction is not only words; it’s bricks, and they eventually form the whole that I had visualised.

Through writing, I am essentially solving some sort of an intellectual task, only solving it gives birth to new tasks. Various structural solutions that are there from the beginning – such as the decision to have two major parts or complex fragmentation in the case of REC – are my Ariadne’s thread. And even though throughout the process of writing the labyrinth constantly transforms itself, as its author, I always see it as if from above. That way I have everything somewhat in control. As a writer, I will always see the book in a much more technical sense than a reader.

However, there is also another side to it. As a writer, I am more of an adventurer than a planner. It means that one of my methods is indeed, to get lost and then try to find a way out. I call it “the jump”: I take a deep breath and jump, dive deep into it; after a while, I raise my head above the surface to get some oxygen and then dive again. My writing tools are subconsciousness, dreams, coincidences and unexpected events, therefore, getting lost is inevitable and one has to have the courage for it.

One of the main protagonists, Cole, is one of the most interesting characters I have read in years. He tells a story about his mysterious, odd twin, but perhaps the twin doesn’t exist, perhaps he is the twin; also, the portrayal of Cole as eccentric, possessive, manipulative, powerful and probably mentally ill on some degree is without comparison. Somehow, it is such a recognisable character, and yet, I feel you didn’t use many actual descriptions – instead, everyone is unraveled through atmosphere, places, events. How does one really write an atmosphere? Where do you get your inspiration?

I get my inspiration from non-verbal atmosphere – music, for instance, but also fiction, which affects my feelings and language, or nonfiction, which helps me turn chaos into order.

A setting as well as characters are not born through planning, but through writing and especially, through happening – be it imagined, concrete or dialogic. Any possible planning of a text takes place only after the character has already received an impetus by intuition.

Opposite to photographer Lucas, who was there from start, Cole began in a dream. I had a very emotional dream and while writing it down the next morning, the beginning of friendship between Lucas and Cole came to me in a flash. So the first version of that period until their first rupture is handwritten in my notebook.

Photography plays an important role in the novel. Not only the boys in it pick it up as a shared hobby and a way to observe the world, but also the readers feel as they have just entered a gallery, not a book: the novel is divided in chambers and halls rather than chapters, bigger transitions are marked by the change of floors. Could you reveal a little bit the idea behind it? Why did you choose taking pictures and filming videos not only as a theme, but also as a part of novel’s structure?

Images and videos has been the structure from the very beginning. I wanted to turn the pictures upside down, bring up the background and look at what is left behind the object that was actually meant to be photographed. From the beginning, I saw this novel as an art exhibition where pictures transformed into words could all be seen at the same time, without any particular order.

On the other hand, I was still writing a novel, which means I had to find a way to carry out the exhibition in a form of a book. I wanted to create spaces that the reader could enter and, just like in an exhibition, interpret things through their subconsciousness and experiences, not the ready-made explanations of others. I wanted the novel to drift between pictures and words and escape any direct interpretations.

Another thing to remember is that REC is also an analysis of dealing and living with trauma. Through the structure, I also wanted to show what happens inside the human mind. Some things can be so difficult that you cannot look at them directly, but perhaps you can substitute them with something – such as obsession or a work of art.

Just recently, on the Literature from Finland podcast, Finnish author Selja Ahava expressed a regret about the decrease of the recent years in titles that would simply be good literature – meaning that books are nowadays often appreciated for that they deal with burning societal issues, but on the other hand, things like good structure, style, sense and richness of language may often be overlooked. REC seems to be one of those rare gems that includes all of the latter features. Was it a conscious decision to prioritise literariness? And would you agree with Ahava’s thought?

To emphasise “literary” is not so much of a conscious decision, rather, my way of being a writer. I write books that I myself would want to read. I don’t base my choice of readings on a certain topic, so I can hardly imagine writing that way. First comes the structure, then storytelling and language, then the story itself and only then comes a topic. I often notice the theme only after I have finished writing the book. And exactly this way of writing eventually brings the book closer to the topical, important questions and issues. I worry about the same thing as Ahava.

I am writing two novels simultaneously, one for adults, and one for young adults. Both fathoms the present moment and our near future.

What is your favorite word?
Äärimmäinen (extreme, ultimate).

What is your least favorite word?
Kokoustaa (a form of the phrase “to have a meeting”).

What turns you on creatively, spiritually or emotionally?
Music.

What turns you off?
When there are too many everyday tasks to do before writing.

What is your favorite curse word?
Vittusaatana (could be loosely translated as “shitfuck”).

What sound or noise do you love?
Boot-heels on icy asphalt.

What sound or noise do you hate?
The noise of a diesel engine running so low that you feel it in your body.

What profession other than your own would you like to attempt?
A director of short films.

What profession would you not like to do?
I wouldn’t be calm enough to be a neurosurgeon. It would be horrible to open minds that way.

If Heaven exists, what would you like to hear God say when you arrive at the Pearly Gates?
”Go back and finish your book!”