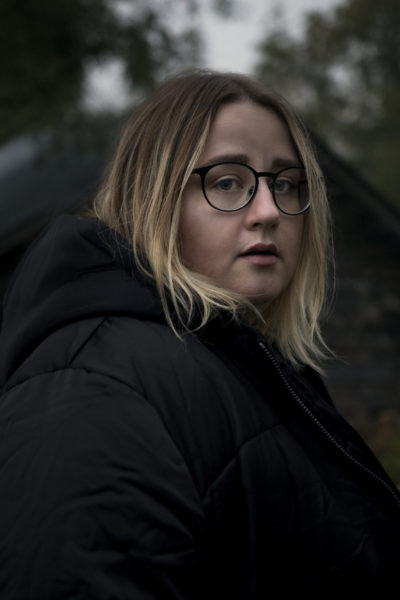 Your debut novel Chasing Water, as well as The Itch, published shortly afterwards, have been praised for the portrayal of life and challenges of young generations, the inner feelings that are so difficult to name, let alone understand – such as power balances within a friendship, or dealing with the impacts of an enormous trauma. Could you open up a little about how you come up with the topics and characters you write about?

The birth of my stories usually begins with one scene or a particular feeling I want to capture, and then I just see where it takes me. Usually, that feeling or scene is something I’ve experienced myself.

For Chasing water, the scene was a girl in shorts lying in the lawn on a warm summer day and feeling the grass beneath her bare thighs, hearing a soft song in the wind from a nearby chapel. And then the rest of the story came from – well, I really don’t know where. I never plan what I am going to write or how it’s going to end, I think I would lose interest if I did.

When I started writing The Itch I wasn’t sleeping very well. Being awake at night when my husband was asleep next to me, I sometimes felt I was going insane; I never did though, at least not clinically. I was interested in where that line runs, what separates me from some of my friends who battled psychotic tendencies or schizophrenia at the same time. I never got an answer, but I got a book out of it.

The Itch in particular is charged with a lot of psychological tensions – both in the main protagonist’s mind as well as in her relationships with other people. Do you feel that for you personally, writing is a form of therapy? A way to diffuse inner anxiousness, perhaps a feeling of uncertainty? And perhaps, a way to help others?

For me, fiction has always been something where I turn for help or inspiration. Writing was almost a natural next step after a lifelong love for reading fiction. So in a way, yes, it is a form of therapy. I think I write to understand and forgive – my own behaviour and others’. It’s also a way to live other lives, to take a thought or emotion and run with it and see where it takes.

I don’t feel I am any sort of authority on anything really; I would never dream of writing with “helping others” as a main goal. If my writing can help anyone, it’s a bonus, but never a goal.

You belong to a Swedish speaking minority in Finland. As a writer, do you see it as a challenge or, perhaps, on the opposite: an opportunity?

For a Fennoswede writer there are a lot of opportunities for grants and scholarships, and I am very grateful for that. Also, the community is small, and I have always preferred small ponds over great oceans. But small ponds come with other limitations, so I guess there is good and bad in everything.

You are also an active blogger: Blejk, Fejt & Fab has been around for years, having several thousand readers visit it regularly every month. Could you tell a little bit more about it? What do you write about, and how did it all start?

I have blogged under the name Blejk, Fejt & Fab (which loosely translates into Pale, Fat & Fabulous) for about five, six years now, but before I became BFF Ellen, I had written under other names, too – all in all for fifteen years, give or take. I write about everyday stuff, things I have seen, read or listened to, as well as thoughts on writing and being a writer.

I just recently started thinking about my blogging as a part of my writing; online writing is still not really considered as serious, and like with most areas in life dominated by women, it has a low status. And yes, my blog is often both silly and not very thought through, but it is still a project I have been able to keep up for fifteen years which has given me a daily writing routine and an audience.

I love blogging and I’m not planning on stopping. At the moment, my blog is – I dare to say it – one of the biggest Swedish blogs in Finland, but I am not an influencer in that sense. In fifteen years time I have made around 250€ on it and spent a lot more. But since I have made the decision to keep it mostly free from commercial entries, I see no need to keep it professional. It just a fun hobby.

I have been working a lot on creative writing and creating with kids and teenagers – that has been so much fun! I think I really want to try and write for those age groups as well. But honestly, I seldomly make plans. I just want to write.

What is your favorite word?
In Swedish it’s sveda (“pain, suffering”), in Finnish it’s ilta (“evening”), but I never thought about it in English. Darling, maybe? There was a really cool Swedish riot girl magazine in the early 00s called Darling, so maybe that then.

What is your least favorite word?
Entrepreneur.

What turns you on creatively, spiritually or emotionally?
A friend of mine who is an artist once told me that whenever I felt uninspired I should look for ugly things. I don’t know why, but it really helps.

What is your favorite curse word?
Different forms of Satan / Saatana.

What sound or noise do you love?
All kinds of water moving; dishwashers, oceanwaves, raindribbles, snow under your shoes.

What sound or noise do you hate?
Cutlery against teeth.

What profession other than your own would you like to attempt?
Archeologist, midwife, librarian.

What profession would you not like to do?
Any job that requires a suit.

If Heaven exists, what would you like to hear God say when you arrive at the Pearly Gates?
“Just down the corridor and to the left and they all will be there.”