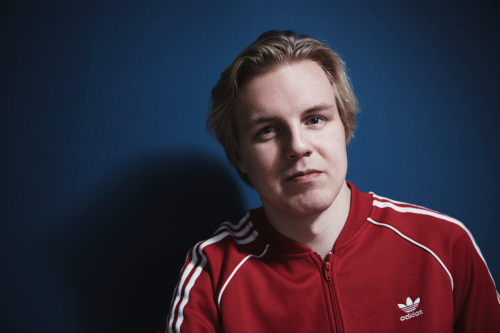 Your auto-fiction Off the Ground gained immediate attention upon its release in August, and has been praised as one of the strongest debuts of the year 2019. In addition to the importance and universality of the topic – trying to deal with childhood traumas as a grown man – the book also has a powerful storytelling that truly helps the reader to get under the main protagonist’s skin and, I imagine, deal with a lot of personal issues of their own. Do you feel writing this book has changed you in any way?

Writing this book was a big relief, in a way. For so many years I’d been silent about these issues and problems I had with myself, and then I just put it all down and told my story as honestly as I could. It’s been so rewarding to hear that people can relate to it.

I feel that auto-fiction is a tricky genre, because people immediately assume that everything you wrote has happened to you in real life. Isn’t that scary? Would you wish people made a clearer distinction between your life and the main protagonist’s experiences; focus less on you and more on Aaro?

I understand that, with this kind of theme, people often ignore the literary side of the book and focus on my personal story. But for me, Off the Ground is a novel – a piece of art – more than anything else. I didn’t want it to be just a ”therapy project” or something like that. I want to write good literature, and I think this book should be read as fiction. On the other hand, I like the idea of a writer sharing something personal with the readers and verbalising things that can’t be said in everyday conversations. However, it shouldn’t be the purpose; the purpose is to write good literature.

Judging from the many reviews and interviews that appeared in the Finnish media, I feel that every reader found something different, something just for themselves in your book: some found comfort in relating to the protagonist’s insecurities, while others related to the complicated, mute relationships within the family; some were encouraged to relive and deal with their difficult past, while others began understanding what life was like for their siblings, friends or other dear people who experienced abuse or bullying. What is the novel about for you personally?

For me it’s a youth novel, like The Catcher in the Rye or Less than Zero, but with a modern twist. At least I tried to do something like that. It’s about stepping into adulthood and dealing with the scars in your memory. And everyone has those scars, so I think everyone can relate to the story and see themselves in it.

I think to me, the most interesting and powerful thing in the story was that the narrator didn’t dwell on the cruel bullying parts; instead, he seemed to focus on showing how haunting those memories can be, how they affect one’s life constantly, in every step of a day, even years later. One translator even described it as a sort of “male feminism” – trying to open up about some very personal feelings in a society and time where men still rarely do that. Would you agree? Do you feel there still exists a certain social stigma when it comes to publicly scrutinizing men’s emotional life?

I think, when it comes to traditional gender roles, times have changed quickly and that’s only a good thing. Still, I’ve always felt the pressure that as a man, I should be strong and confident etc., and that I don’t fit the society’s ideal of a man. I wanted to show the other side of masculinity – write about fears, insecurity, worrying about your looks and similar things.

There’s also quite a lot of humor and self-irony in the book. Is it easy to be objective and sarcastic about a character who often feels (and often is) a victim? What helps finding humor in such situations?

Humor and sarcasm are my coping methods – I like it when you can laugh to dark issues and depressing situations. I also think that a serious issue always needs a comic relief, and such moments give perspective to the story and its scenes.

I feel that auto-fiction is my style, at least for now. I want to write about climate issues, environment, how a young adult looks at the world right now.

What is your favorite word?
Shadow.

What is your least favorite word?
Ego.

What turns you off?
Grocery stores.

What sound or noise do you love?
The sound of waves in the Atlantic ocean.

What sound or noise do you hate?
Motorcycles.

What profession other than your own would you like to attempt?
I’d like to be a person who plays keyboards in a rock band in the evening and plants trees in the daytime.

What profession would you not like to do?
Everything else.

If Heaven exists, what would you like to hear God say when you arrive at the Pearly Gates?
“What the hell took so long?”