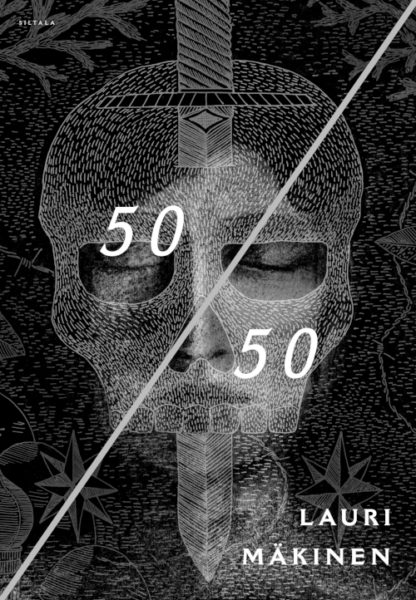 When the truth finally emerges from among the shadows, it is too devastating to face.

It is autumn 1941, and the Continuation War is being fought in northeastern Finland. Military detective Härmä discovers a crashed aeroplane; a red star shines in its tail. The crew of the plane are dead, and the four Russian spies carried on it have vanished. The hunt begins.

A short time later, three of the spies have been killed. Härmä has captured a woman and a man found wandering in the woods. The woman is badly wounded, the man is naked and covered in tattoos. Both tell their own stories, with more and more new ones emerging. Which one is telling the truth, or is either, or are they both? And above all: which one is the missing Russian spy, faced with the death penalty?

Lauri Mäkinen’s second novel offers the reader a masterful combination of a war story, a whodunit with creeping suspense and historical fiction with a storyline that moves with ease from peacetime Helsinki to the lives of Finnish immigrants in Canada, and from the battlefields of the war to a Soviet prison camp steeped in cruelty.

“Survival and what a man can and will do to survive is one of the main themes of the novel. The way the novel builds this theme is what makes it one of the most magnificent reads of the autumn. (…) The plot moves between the suspicions and the guilt both the suspects carry so fast that you feel like reading the crescendo of a Hercule Poirot mystery.”
– Aamulehti newspaper

“One of the best novels of the year.”
– Blogger Jorma Melleri

About the author:
Lauri Mäkinen