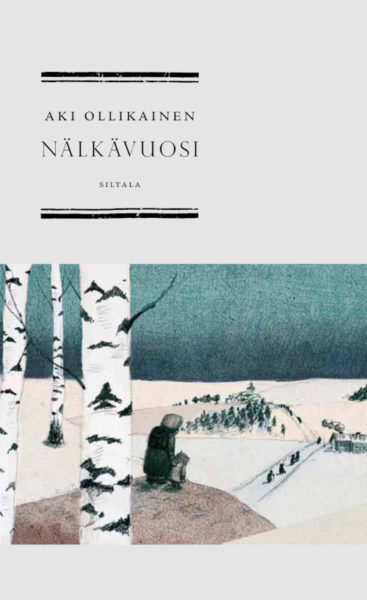 The colour of death is white, and it covers everything.

Finland, 1867. It is winter, and food is in short supply. In the countryside, great numbers of tenant farmers are forced to leave their homes to beg for food. In the capital, the Senate considers emergency aid measures. While young officials fret in their heated apartments over their own problems, a tenth of the population is facing their death in the famine.

Marja has to leave behind her weakened husband Juhani to waste away. She takes their daughter Mataleena and son Juho to the cold and snowy winter roads. Soon Mataleena’s strenght gives out. Marja strives to reach the destination of her dreams, the metropolis of St.Peters burg, gritting her teeth and trying to survive by any means.

Aki Ollikainen’s masterful debut shows that when a person has nothing left to lose, humanity gets trodden underfoot as a unnecessary burden. But when it is almost too late, the paths of the fine gentlemen from the city cross those of the wandering beggars, and humanity emerges as the winner.

The setting of White Hunger is grim, and the plot points of the story are bleak, nearly without exception. The fully formed, bittersweet novel tells its brutal story with warmth, precise expressiveness and a force beyond compare.

The novel has received numerous prizes and nominations, and it was longlisted also for the Man Booker Prize, Prix Femina and Europese Literatuurprijs.

“White Hunger is Aki Ollikainen’s debut work, but it is written with the control of someone who has mastered the form. It has won four of Finland’s literary prizes, and I imagine this is not only down to the spare, taut prose, but to the way in which it documents one of the most painful periods of Finnish history.”
– The Guardian

About the author:
Aki Ollikainen