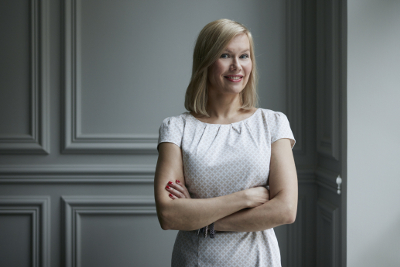 Novel Mrs C. received an overwhelming attention in Finland. A bestseller among the readers, it also won the Torch-Bearer Prize and the Bonnier’s Grand Journalism Prize, and was nominated for the Lapland Literature Prize. Moreover, it gained many positive reviews from critics, and Finnish literature guru Seppo Puttonen named the novel as ‘the book that makes him happy’. Where do you personally think lies the reason for such a success? And how do awards change the life of a writer, if at all?

I am overwhelmed by Mrs. C.’s success and feel truly thankful for everything it has achieved but for me; personally, and as a writer, awards don’t mean much. Of course, it is nice to hear that people like your work, but for me writing is about challenging myself. If a writer starts putting audience’s feedback and reception first, writing soon becomes impossible.

And why this all happened… I guess Mrs. C. is a very touching story about love that grows, a person who constantly tries to find her place, and an atypical marriage in its time. It is a book about womanhood mentally, physically and socially, and perhaps these are the topics that touch many readers’ souls.

I write fiction, but you can sense my breathing and my heartbeat in my prose. Maybe this makes a reader recognise something she/he knew but forgot.

Mrs C. is an exceptional and subtle way of exploring a female inner world. Rather than portraying a woman who mindlessly goes out into the world and does whatever she wants, it tells a story about a constant battle: between a strong, almost revolutionary soul and a very traditional mindset; between craving for bigger things in life and feeling responsible for your family; between longing for a change and, at the same time, trying to blend in a conservative society. Could you tell us a little bit about the beginnings and how did you come up with such concept?

When writing Mrs. C., I was interested in how one becomes an exceptional individual. I wanted to see behind or inside a character that we know from statues and history books, and try to meet that person. A young girl, a young wife, a mother and finally a widow living in a time that is in a way different from ours, but – disturbingly – is filled with the same problems and questions. Who draws the lines? What does it take to break the rules? What are the laws of nature and the laws of mankind? Are they same or different? Why there is gender inequality? Why do we justify things to ourselves with cheap arguments and slipping to old habits? Contradictions are fascinating.

The novel is loosely based on the life of the first notable Finnish female writer and feminist Minna Canth. How do you think it opens up for the foreign readers who might not be familiar with the real-life prototype of Mrs C.?

First of all, Mrs. C. is not a book about Minna Canth! It is my imaginary tale in which facts and fiction are intertwined with the most refined language I could create. It is a book about a peculiar couple, about a love that grows, and also about the female friendship. In my opinion this is enough for a book even without knowing connections to the so-called facts that loom in the background, but in great distance.

Another protagonist in the book, Mrs C.’s husband Ferdinand, is also given a huge role: the reader is following his struggle too, while he’s trying to combine love and respect for his wife with his own passions and status in a small community. I’d say it is a very touching and unusual approach, as in the stories of marriage we are often only given one side or another, victimising one and vilifying the other. Would you agree with such statement?What was the most important thing for you when portraying a marriage of two distinctive people?

You’ve got it right! Marriage in literature is often described as a battlefield of domination, submission and deception – there are no stories about happy marriages. A happy story usually ends with a wedding and the reader is told that they lived happily ever after. It never goes on with that they had a good time also next Sunday, and then the following month was OK, and after three years they were still happy together. Of course, it is the case, because a happy story is considered to be a boring story – or so you might think if you haven’t read my Mrs. C. yet. 🙂

In portraying two very distinctive people I was interested in exploring how they would learn to appreciate each other with their faults and incompleteness, and how they might struggle to give their spouse the space he/she needs in order to truly find themselves. In my debut book, Lempi, I cherished the idea that we never see the whole picture of other people, although we should; Mrs. C. continues the same theme, showing the marriage from different points of view of two spouses.

I am unbelievably lucky to have two separate walks in life that I am very passionate about: besides being an author, I am also a high school teacher in Finnish and Literature. This alternation between the two occupations gives me time and space to breathe and rest between books, doing something totally different. But I can say that something, an idea, is growing in my writer’s brain and again, I want to challenge myself in some different way. However, this initial thought is too fragile to bring it into the daylight at this point. Meanwhile, I keep on writing columns for the biggest women’s magazine in Finland and cooking pasta for my family, just as I did before becoming an author.

What is your favorite word?
Hillaämpäri. A bucket full of cloudberries. My favourite thing to see and to fill swamps in late July in Lapland.

What is your least favorite word?
Sleep hygiene. It is a disgusting phrase that includes stupid advices of e.g. darkening and cooling your bedroom before going to bed – everyone with insomnia has tried these tricks. They don’t help.

What turns you on creatively, spiritually or emotionally?
Being alone, also, travelling and reading. I’m a kind of a visual person so old pictures can do the trick for me. Also places are inspiring. I have to know, for example, how many steps my protagonist needs to take in order to get home from the shore. When writing Mrs. C., old city maps were extremely helpful.

What turns you off?
Bad smells.

What is your favorite curse word?
Voi raato. Oh kind-of-an-ugly-corpse!

What sound or noise do you love?
The aspens’ tinkling at my summer cottage. It means it’s summer and thoughts are as light as the nights.

What sound or noise do you hate?
The creepy noise that occurs when you push the plastic bubble playing a board game called Kimble.

What profession other than your own would you like to attempt?
I think something to do with colours and forms, maybe a photographer or an interior designer, or a dressing assistant?

What profession would you not like to do?
A butcher. A seamstress. A truck driver. A nurse. A personal trainer. A politician. When I was young, I worked in different places, like a cattle-shed or a greenhouse; I was also a cleaner in a bank and later, I sold coffee and cleared up tables, floors and toilets at a gas station. I was a lousy pizza baker. I could not get them into the oven in one piece.

If Heaven exists, what would you like to hear God say when you arrive at the Pearly Gates?
Oh watch out, your dogs are coming this waaayyyy…!