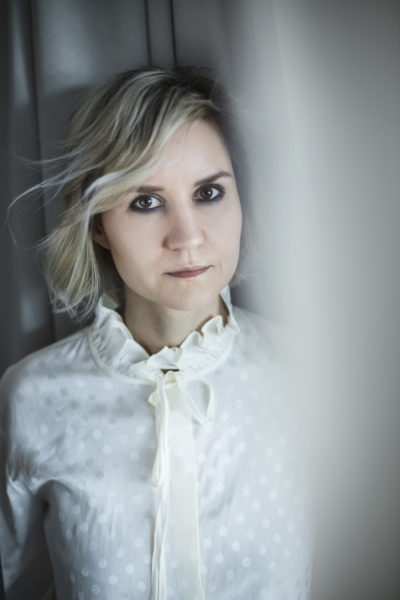 – Your novel Maybe This Summer Everything Will Change has been quite a debut: it became a real dark horse of the busy Autumn season, loved by the readers, and nominated for The Helsingin Sanomat Literature Prize. What do you personally think was the secret of such wild success in Finland?

In a nutshell I’d say: the timing was right and the book is GOOD! For years before it came out, I felt like there was a need for people to read a story about a person who isn’t exactly enjoying life. This feeling got stronger and stronger when I posted stuff on social media, mostly Twitter and Instagram, and realized that people felt better when they saw/read my posts whether they were memes or tweets about feeling tired or just simply bad. It seemed to me that people also felt at ease when they read a blog post of a blogger telling about his/her struggles in life, but what frustrated me was that all those stories were written in the past tense. I wanted to write about someone who isn’t doing great right NOW and isn’t sure if she/he’s ever gonna feel ok again. Basically I wanted to write a book I would have wanted to read myself when I was trying to get myself together again after a tough break-up.
– The novel has a lot of ‘chick lit’ elements in it, however, not entirely typical to the genre: it’s witty, entertaining, easy to read. At the same time, you manage to touch a lot of painful realities of today’s generation: uncertainty, being stuck in the cycle, obsessions, depression, and others. One cannot help but think: it must be at least partly autobiographical? How much do you identify yourself with the main character and her everyday life?
I did start to write the book as a diary: I was indeed lying on my balcony and I wasn’t done with being dumped yet. By writing, I wanted to find a way out of that mess. My imagination isn’t that amazing but I’m a master at exaggerating things so, to make the book more interesting, more funny and more, well, something that doesn’t make my parents, friends etc. hate me, I took all the stuff I had written, exaggerated it and mixed it all up. And then I mixed it up some more.
– Could you tell a little bit more about the characters, the creation of them? Most of them have a lot of very particular qualities and habits – for example, narrator’s obsession with crisps and dip (or other food, for that matter). How did you come up with such approach? Why small particularities matter so much in this case?

I want to cherish all the ordinary and boring things we do because that’s what life is mostly about. If I spend so much time on taking out the trash, washing the dishes and removing my make-up day after day, I want to know why I’m doing all that. By writing about everything there’s behind these “little” things I hope to find out if I should keep doing them or not. I guess I have the urge to know if I’m making the best out of my life or not. I want to have fun while I’m here!

What comes to the crisps, well, that thing has really gotten out of hand. The truth is, I was really addicted to crisps and dip in 2015, 2016 and 2017. Besides writing, the crisps were all I could think about so I kept talking about them to everyone around me. People were like “why are you SO obsessed with them” and I started to feel very guilty about this habit of mine. At the same time social media was filled with both healthy and beautiful food (smoothie bowls, water melon “cakes” and whatnot) and it really seemed to me that people had to hide all the not-so-healthy and not-so-instagrammable food – in case you weren’t Bella Hadid with a slice of pizza. Feeling guilty about eating my crisps really did my head in, so I just had to write about it and say: “This is me eating what I want, fuck you!”
– Was this novel more of a confession, or a way of helping others, as if saying: “You are not alone in this”? What is to you the most important thing when writing?
The most important thing when writing was the thought of giving the book my all and seeing if any other people (apart from me and my editor) would be into it.

If my book was a confession novel only, it had been easier for me to write. But who wants to read 300 pages about self-pity? Not me. It’s not that simple to write something that makes people want to turn the page and spend hours reading… What I’m trying to say is: writing the book was hell! But it was well worth it because now I’m the happiest I’ve ever been. The break-up that once felt like the end of the world turned out to be the best thing that ever happened to me. That feels magical.
– Despite sometimes melancholic tone, your novel has hope for its characters, for the young generation. Where do you personally see hope for us? What comforts you the most in terms of our future?
I get comfort in little random moments that come and go. I like the fact that you never know when something beautiful comes in your way and changes your life completely. Or then it doesn’t, but the possibility is always there and just knowing that gives me happiness and hope.
– What are your plans for the near future? What can the readers expect?
I’m just going to sit down and write. Who knows what will happen?
Finally, a version of the famous Proust Questionnaire, used by the legendary French journalist Bernard Pivot at the end of every broadcast of his literary television talk show Apostrophes.
What is your favourite word?
Bimbo.
What is your least favourite word?
Ripuli. Diarrhoea.
What turns you on creatively, spiritually or emotionally?
Quotes about writing, book stores and everything about Tracey Emin.
What turns you off?
My flat whenever it’s unclean.
What is your favourite curse word?
Runkku. Wanker.
What sound or noise do you love?
My dog snoring.
What sound or noise do you hate?
People clearing up their throats.
What profession other than your own would you like to attempt?
None, I just want to write.
What profession would you not like to do?
Too many to mention!
If Heaven exists, what would you like to hear God say when you arrive at the Pearly Gates?
“Would you like to have a drink?”
Photo: Marek Sabogal